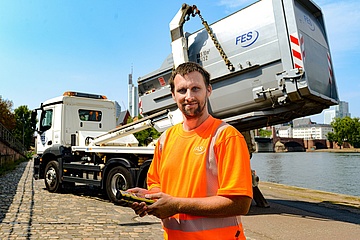 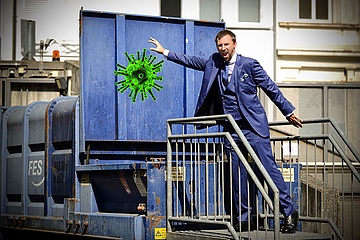 The successful campaign "Clothes make the man" by the initiators Stephan Görner, Sven Müller and photographer Daniel Baldus is now entering its sixth year. Since 2015, the campaign has photographed people with unusual or dangerous professions who wear neither costume nor tailored suit at their workplace. For example, the sewage plant diver, the toilet attendant, the table dancer, the asparagus farmer or the industrial climber have already been the focus of the camera. Whether in overalls or uniforms, they ensure day after day that a city like Frankfurt am Main remains safe and clean. Unfortunately, public recognition and appreciation for this is often too low. This is to be changed a little bit with "Kleider machen Leute".

During the CONVID-19 pandemic, many people lost their jobs, others went on short-time work or had to work from home. It is only now, during the difficult period when we are all taking a step back, that we are appreciating professions and the people behind them who work on the front line every day, making sure that seemingly normal processes run smoothly even during the crisis.

The "Clothes Make the People" campaign in 2020/21 is dedicated to these Corona heroes. We would like to introduce some of them in more detail. Photographer Daniel Baldus has photographed them, first authentically at work, then in costume or in the noble threads of Frankfurt's well-known tailor Stephan Görner.

.and suddenly a lot is different! This also notes Alexander Laga (34J), driver and loader at the Frankfurt Entsorgungs- und Service GmbH. Closed restaurants, hotels and businesses. Instead, pizza boxes, broken glass or worn hygiene masks on the streets and squares in and around Frankfurt. He has never been on short-time work, works without a mask when he disposes of overfilled dustbins, old clothes containers or contaminated waste. Since 2018, he has been doing this job at Frankfurt Abfallmanagement- und Service GmbH, a subsidiary of FES.

"Normally, I take care of the secure destruction of address lists and data carriers as well as the disposal of waste from chemical laboratories or hospitals. But suddenly there's a funny feeling when you have to dispose of a hazardous waste container from a Corona intensive care unit, with protective clothing, syringes or hygiene masks, or a torn open garbage bag next to the trash can. The potential risk of getting infected is a constant companion" says Laga, who loves his job, is on duty every day and has received an extra thank you from many people especially now during Corona time.

A native of Offenbach, Laga enjoys playing American football in his spare time. He is a running back for the Wetterau Bulls and a handball goalie in Bürgel. Actually, nothing knocks the model athlete down so quickly, but during the COVID-19 pandemic he would have liked to simply dispose of the virus in the hazardous waste container.

The first Corona hero of the campaign "Clothes make the man" therefore showed at the photo shoot exactly how. In the blue tailor-made suit with vest and matching tie by tailor Stephan Görner, he "knocked the virus symbolically just in the barrel" that it may hopefully disappear forever. The beautiful suit, however, he may keep and is looking forward to his new girlfriend Tina chic to take out.

Spätestes to the charity and fashion gala "clothes make people" on 23. January 2021 in the Hotel Kempinski Gravenbruch he will wear it again, because there he will be honored with five other Corona heroes, who are godfathers for all those who kept life going during the pandemic, supported weaker or older fellow human beings and were socially engaged despite great danger.

Tickets are available and can be ordered via the homepage www.kleider-machen-leute.net or at the organizing office Sven Müller PR & live communication. Admission including candlelight dinner, drinks of the evening costs 250 euros per guest.