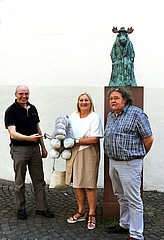 This week, the Caricatura Museum has cracked a real milestone. The "most beautiful museum in the world", as museum director Achim Frenz always likes to call it, was able to jump over the hurdle of half a million visitors this week. Mrs Renate Prillwitz-Boll from Egelsbach had come with her husband Peter Boll to see the Exhibition on Otto Waalkesˈ pictorial oeuvre and the current hanging of the New Frankfurt School. She can rejoice in being part of the museum's success story as its 500,000th visitor - and in receiving an Ottifanten presented to her by Achim Frenz.

Frenz is happy about the positive visitor reception that his house has been able to record so far: "We are very pleased that more and more visitors, also from abroad, have found their way to the most beautiful museum in the world in recent years. Half a million, that's a reason for us to celebrate, as it shows the high value placed on satirical social criticism today."

For almost 10 years now, the Caricatura Museum Frankfurt has been presenting national and international cartoonists and draughtsmen of comic art. A total of 44 solo exhibitions have been realized, including those by the very great representatives of comic art. In addition, the permanent exhibition of the New Frankfurt School is hung every six months, as the Caricatura has more than 7,000 originals in its collection. In addition, visitors are offered numerous events such as the Festival of Comedy (which unfortunately has to be cancelled this year), the Night of the Museums, readings, book presentations and stage presentations.

For the city of Frankfurt, the Caricatura Museum is a real treasure that underlines the diversity and internationality of the Main metropolis. With the artists of the New Frankfurt School Robert Gernhardt, Hans Traxler, F.W. Bernstein, Chlodwig Poth and F.K. Waechter as well as the team of authors around Bernd Eilert and Pit Knorr, the museum has long since gone beyond the boundaries of a city museum.

More info can also be found at: www.caricatura-museum.de