The Caricatura shows an animalistic exhibition
from FFM Aktuell 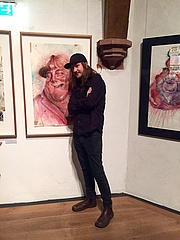 At the Caricatura Museum, the next few months will be animalistic. And yet also very human. Because the exhibition ANIMALISM, with works by Frank Hoppmann, focuses on two contrasting processes - the humanization of animals and the "animalization" of humans. With merciless ruthlessness, Hoppmann portrays politicians, actors, musicians, athletes, and philosophers, and with his very special eye creates unmasking, funny, but also disturbing images. We tend to idealize people who are in the public eye. Not so Hoppmann. He knocks them off their pedestals and shows them in a satirical, exaggerated way that may not always be flattering, but is always very accurate.

This has not only earned him much acclaim from other artists like F.W. Bernstein. His work to date has also been recognized time and again with exhibitions and awards. His pictures, cartoons and drawings have been published in Rolling Stone magazine, the TAZ, the WELT or the satirical magazine "Eulenspiegel". Hoppmann gained international fame when the Los Angeles Times published one of his Trump cartoons after the US election - even though he was called Frank Hoffmann in the caption. The incumbent US president must therefore not be absent from the Frankfurt exhibition. So are the Chancellor, the German President, artists such as Udo Lindenberg, Herbert Grönemeyer and Loriot, or international heads of state such as Erdogan, who hangs at a safe distance from Hoppmann's caricature of Jan Böhmermann.

In total, 183 originals, two prints, 13 large prints, 31 3D objects, a film-sound installation, 18 sketches, 9 books, a digital presentation and much more are on display at caricatura. Among them are several of Hoppmann's fly pictures, which the artist sometimes finds almost meditative to paint when he has once again been extensively occupied with the portrait of a politician or another well-known personality. The exhibition shows very impressively that Frank Hoppmann really is a master of comic art. His satirical-grotesque pictures are not always pretty to look at, but always a revelation, culminating in hearty laughter in most cases, but at the same time thought-provoking.

A beautiful catalogue has also been published on ANIMALISM by Verlag Antje Kunstmann, featuring many of the pictures shown in the exhibition. The catalogue is available for 18 Euros in the museum shop <link https: www.amazon.de animalism-frank-hoppmann dp ref="as_sl_pc_tf_til?tag=frankfurttipp-21&amp;linkCode=w00&amp;linkId=a6b6a1d8e897af9e13a5bb8c80b2f721&amp;creativeASIN=3956142225" _blank>Or can be ordered HERE.