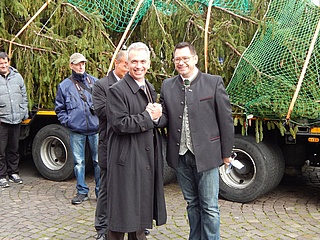 Every year it is a spectacle that many people in Frankfurt love to talk about, but that everyone secretly looks forward to: The arrival of the Christmas tree at the Römerberg! Once again this year, quite a few onlookers and plenty of media representatives gathered there to follow how Lord Mayor Peter Feldmann accepted the gift from the holiday region Skijuwel Alpbachtal/Wildschönau in Tyrol on Römerberg, before the 33-metre, 9-ton tree from Brandenberg was then finally erected by employees of the fire department on its central place for the Christmas market, which begins in a few weeks.

The transport length of 40 meters in total caused some delays in the delivery, some curves in the city proved to be too narrow for such a long cargo. But unlike last year, the tree arrived late, but in one piece at the Römerberg. In uncomfortable weather the tree was then prepared for the installation. And as soon as it was erected, the first prophecies of doom began. But for Lord Mayor Peter Feldmann, grumbling about the Christmas tree is simply part of the job. Because he knows: At the latest when the lights on the tree shine for the opening of the Christmas market, the grumblings usually fall silent.

Now, however, the branches of the tree must first hang out in peace before "Stefan", as the tree has been christened, is decked out and decorated. So the biggest Christmas tree Frankfurt has ever had is once again causing a lot of excitement - but in a few weeks it will once again create a very special atmosphere on the Römer. And let's be honest: a tree you can't complain about (that's what happened two years ago) is almost a bit boring ;-) 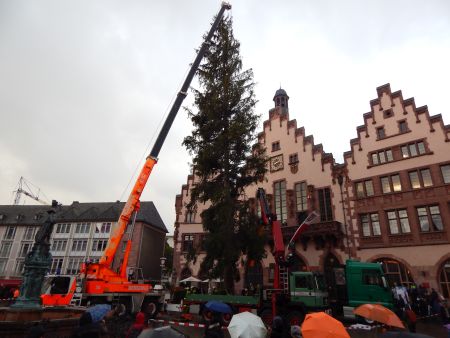