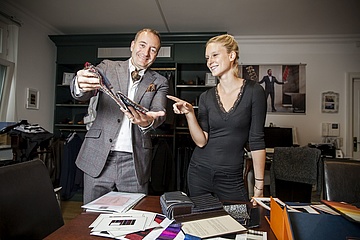 Their first names are Pino, Mike, Michael, Ozan or Marita. They have unusual occupations such as Worschtdealer, industrial climber, sewage plant diver, gold tester or chimney sweeper. These people are the focus of the 3rd Charity Gala "Kleider machen Leute", which will take place for the first time on Saturday, 11 November 2017 at the Gesellschaftshaus Palmengarten.

Through the campaign "Kleider machen Leute" whose initiators are Stephan Görner and Sven Müller, people with extraordinary, difficult, strenuous or dangerous jobs are honored. Recognition, appreciation and respect for these occupational groups, without whom a normal life in a large city such as Frankfurt would be impossible, are the aim of Nikita Kulikov's photographic work. He ensures that these professional groups are authentically photographed at the workplace before and later in a noble costume or in a tailor-made suit by Stephan Görner.

At the social event is the elegant fashion for ladies and gentlemen, lifestyle, dancing but also around the charity idea to do good in the focus. Thus, in the past two years, a total of 60,000 euros was generated to the Leberecht Foundation from the proceeds of the raffle and donations.

Patron is the Prime Minister of Hesse, Volker Bouffier. The gala will be hosted by the charming radio presenter Evren Gezer. Star guest is Marianne Rosenberg, who sings her most beautiful hits.

Besides Rosenberg, the Fashion Connection will provide dinner and dance music. Later in the evening, DJ KC will play until the early hours of the morning.

A highlight will be the VIP fashion show, where five well-known personalities will venture onto the catwalk in custom suits and costumes by Stephan Görner to showcase his fashions. The succession of star chef Amador, ex-national goalkeeper Uli Stein, NDW singer Markus Mörl, weather god Thomas Ranft and presenter Rabea Shif will step up:

Kim Hnizdo, winner of the casting show Germany's Next Topmodel 2016

400 guests are expected at the Gesellschaftshaus Palmengarten. Tickets cost 250 euros in the ballroom and 195 euros in the gallery. Included are the champagne reception, the 3-course canlelight dinner, fine wines from Winebank and all drinks. "A really good price management ratio as Stephan Görner and Sven Müller, the initiators of the social highlight find". A ticket for the raffle costs 10 euro.

Following prominent personalities will be present at the gala evening:

Dr. Peter Feldmann, Lord Mayor of the City of Frankfurt

The menu of the gala evening:

You can also find more info at: www.kleider-machen-leute.net