The countdown to GREEN Sauce DAY is on
from FFM Aktuell 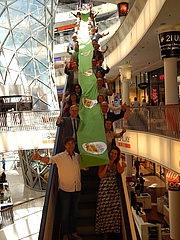 Just a few days to go: on Thursday, June 22, 2017, the whole of Frankfurt will celebrate the first Green Sauce Day. This should not only taste good, but also bring a world record for the city: If at least 231,775 people eat Green Sauce on that day, the targeted world record will be set. What the GREEN Sauce DAY is all about, we have already told you HERE. Shortly before the home stretch, the initiators Maja Wolff and Torsten Müller, to whom we also owe the popular Green Sauce Festival, have once again announced final details.

The most important message was: Frankfurt is looking forward to eating its way to the world record - but the goal is not yet reached. Until next Monday (19.06.) restaurants, companies and organizers have time to register their actions and order the codes that are necessary so that every portion sold and eaten on 22.06. will be counted. What can you do? Join in on the 22nd, of course, and eat green sauce heartily. But you can also check now on www.gruene-sosse-tag.de to see if your favorite restaurant is already participating - and if not, tell them to take part in this nice action. The same goes for your employers, friends and relatives. Only if everyone participates, Frankfurt can win!

Although eating the Green Sauce will be the main focus on this day, there is of course much more to experience. Especially at a few select locations around the city. These hotspots include the Römer, where not only can Green Sauce be sampled all day. There will also be live music and, starting at 6 pm, the "Frau-Rauscher-Song-Contest". In this contest, hosted by Bäppi La Belle, bands from the region will present their very own version of the popular dialect song. And at 10 p.m. the Römer will be lit up all in green - certainly one of the visual highlights of the day. On Roßmarkt, there will be the "Green Sauce of Cultures", with international restaurateurs from the city combining their typical local dishes with Frankfurt's national dish. The Organic and Vegan Mile will then lead from Roßmarkt to Hauptwache, where organic farmers and caterers from the region will present everything to do with the Seven Herbs. Here you can also taste the "Vegan Grie Soß".

Finally, the "Essen in Hessen" market will be held at MyZeil, where various exhibitors will be offering Hessian specialities, sparkling apple wines, salts and oils, green sauce dishes, spreads and much more. In addition, there will be a stand of Döpfners Restaurant, where the world record sous will be available in different variations. And TV chef Mirko Reeh will be preparing green sauce live for visitors to the market.

That's not all: there will be a big after-work party at Osthafen with a DJ, cocktails and 1000 portions of Grüne Soße, Oberschweinsteige will host a Grüne Soße Olympics with seven stations, and there will be a Grüne Soße meal for the homeless at the Ratskeller in the Römer from 4:30pm. On Paulsplatz, the team from Abenteuerspielplatz Riederwald e.V. will ensure that children also have fun on Grüne Soße Day, and at Titania Bockenheim the Theaterperipherie will be presenting performances on the theme of Grüne Soße - including, of course, a tasting of the same.

You don't have to love green sauce to experience pure indulgence on this day. So, the best thing to do now is to think about where you want to eat the Green Sauce on 22.06., then download the Green Sauce Day App - and you are already prepared for this very special day! We're definitely in - are you?