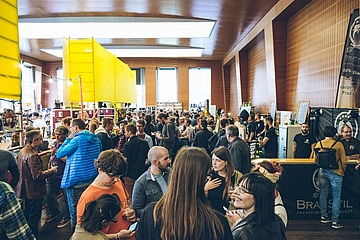 The success story continues: after four successful editions since 2015, the CRAFT Beer Festival is already entering its fifth round in Frankfurt in March. Behind the festival around the topic of craft beer and spirits are the two Frankfurt restaurateurs Sascha Euler and Christian Daam. Already in their 2013 opened bar & restaurant concept na&iuml;v the two have focused on Craft Beer, which was then still completely new territory for the gastronomic Frankfurt. Initially, Euler and Daam started quite small with around 20 types of beer. In the meantime, the whole thing has grown considerably: over 150 beer compositions are regularly on offer. A bottle shop has also been attached to the na&iuml;v and there is a tasting room where regular tastings on the subject of craft beer, gin and whisky, as well as brewing courses are offered. With such success, what could be more natural than the idea of celebrating this popular form of brewing with its own festival?

And so the first CRAFT Festival was held in the old casino of the Jahrhunderthalle in 2015, which was immediately a respectable success despite the somewhat remote venue. In April 2016, the festival moved to Frankfurt's city centre for the first time. In the stylish ambience of the casino on the Westend University Campus, the success of the first edition could be built upon, which led to a third edition of CRAFT right away in autumn 2016. CRAFT 2017 finally showed that the festival had established itself as a permanent fixture among visitors and exhibitors, which is why the first offshoot was held in Essen in the fall.

On 23 and 24 March, you can once again expect a wide range of offerings on the subject of craft beer and spirits at the Westend Campus: breweries, wine merchants and spirits producers will do the honours to present their products, offer you an insight into their work and offer you a series of tastings. A few street food vendors will provide the appropriate foundation. Whether you know your stuff or just want to enjoy the variety of flavours, you'll definitely get your money's worth at this festival. The whole thing is also very sociable due to the atmospheric ambience, which is why the festival is definitely an event for the whole family. Don't worry: There are also enough non-alcoholic offers for the little ones!

The na&iuml;v, the CRAFT Festival and its makers are a real Frankfurt success story, which, judging by the great reception, is far from over. We are very excited to see what else Sascha Euler and Christian Daam will come up with on the topic of Craft Beer in the coming years!

More info on the festival can also be found HERE