The CSD 2019 - A colorful plea for tolerance
from FFM Aktuell 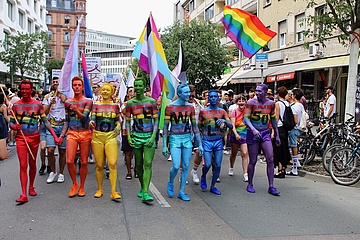 For three days last weekend, Frankfurt was once again under the sign of the CSD. This year, the event had a very special motto, because 2019 was the 50th anniversary of the Stonewall Riots, which gave rise to Christopher Street Day. Of course, there were plenty of serious moments, like the annual moment of silence and various information sessions. But there was also a lot of celebrating, where especially the big demonstration through the city center could set an important, but at the same time also exuberant-cheerful sign for tolerance.

The starting signal for the train, which is the largest demonstration in Frankfurt year after year, gave Lord Mayor Peter Feldmann on Saturday at 12:15 clock with the hoisting of the rainbow flag at the Römer. Head of Integration Sylvia Weber then opened this year's Frankfurt Christopher Street Day on the main stage at Konstablerwache at 2:30 p.m.

For the Lord Mayor, the CSD is an important part of Frankfurt: "Raising the rainbow flag on the Römer balcony fills me with pride. It is an honour to have the CSD here in Frankfurt, which is and remains one of the most political in all of Germany, carried by people who have fought and achieved a lot for our city. The CSD community has shaped Frankfurt for decades and has contributed significantly to the fact that our city is so open, diverse and tolerant today. For this, I thank all those committed as Lord Mayor of this city, but also personally."

Integration department head Sylvia Weber, who is supporting the CSD again this year with 10,000 euros, announced that the city would not let up in promoting the CSD and the LGBTIQ community as a whole: "The LGBTIQ community is a natural part of Frankfurt's society. Unlike most other social groups, their acceptance is unfortunately not only preceded by a long historical struggle for freedom and equality rights. But until today there are people in our society, also in this city, who deny LGBTIQ to be equal." With the "Bahn der Vielfalt" (Diversity Train), which was launched on the occasion of the CSD, a special sign for acceptance and equality was set this year, Weber added.

Joachim Letschert, spokesman for Frankfurt's Christopher Street Day, stressed that fifty years after the first rebellion of queer people in New York, much has been achieved. Above all, visibility and a constant discussion about the needs of queer people. But one should not let oneself be deceived, because despite all the achievements, it has been shown time and again that minorities still run the risk of losing what they have achieved. In addition, there are still those in the group of queer people whose rights must continue to be fought for: "Especially trans* and inter people still have a long way to go and need our support."

And that's exactly why an event like the CSD is still enormously important even in an inherently very tolerant city like Frankfurt and so much more than just a big, colorful fun.