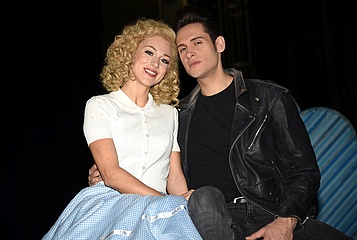 On November 30, true cult comes to the stage at the Rhein-Main-Theater in Niedernhausen: the musical Tommy GmbH shows an exclusive preview of its new production of GREASE - THE MUSICAL. The main actors are Alexander Jahnke as Danny Zuko and Veronika Riedl as Sandy Olsson. For both of them, their role is a rather unexpected stroke of luck; they live up to their legendary film role models John Travolta and Olivia Newton-John. If you want to see for yourself - and be swept away - tickets are available in two categories online at<link https: secure.adticket.de p reservix event _blank> www.adticket.de

Alexander Jahnke and Veronika Riedl go all out in their roles: They play the cool Danny and the shy Sandy with a lot of heart. For both of them it is the first big role of their career. Austrian Veronika Riedl wanted to have "a down-to-earth job for a long time" and worked in a software company before joining GREASE. But singing has always been her passion, besides her job she took private singing lessons and was a choir singer. Then she heard about the possibility of studying musical theatre in Vienna - and passed the entrance exam. Immediately after completing her studies, she then won the casting for the female lead in GREASE against more than a hundred competitors.

By contrast, Alexander Jahnke had no musical experience at all before GREASE director Christian Stadlhofer hired him. Musically, however, he was very ambitious: He was lead singer in the Hanoverian punk band "Call Me Names" and came in second on "Deutschland sucht den Superstar" 2017. It was there that Stadlhofer discovered him. Jahnke had not seen a single musical before then, and "at the beginning there was quite a lot of excitement involved, despite the many rehearsals there was a lack of playing feeling and practice."

With the musical's anniversary tour now underway - celebrating the 40th anniversary of GREASE - THE FILM - Riedl and Jahnke sing and dance as if they've never done anything else. The unique opportunity to see the two on stage in the Rhine-Main area is at the Rhein-Main-Theater Niedernhausen: at the tour preview. The musical Tommy GmbH shows a new, modern multimedia production with live orchestra.