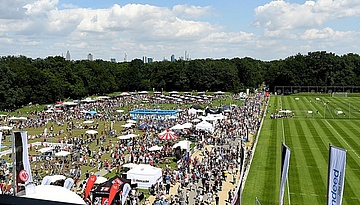 What the people of Frankfurt celebrated when Eintracht brought home the DFB Cup. From the airport to Römerberg, the players were enthusiastically cheered by thousands of fans - and that jubilation can continue for the start of the new Bundesliga season. Because before the Supercup on August 12, when Eintracht Frankfurt will play FC Bayern München in a rematch of the DFB Cup final, there will be another great party with the fans on August 11.

Families and friends of Eintracht in particular will have the opportunity to experience their favorites up close at the big Eintracht Family Day. In contrast to previous years, there will be no classic season opener with a test match due to the match the following day against Kovac's eleven from the Bavarian capital. However, the numerous Eintracht supporters will once again have plenty to look forward to: at the official team presentation at 12 noon, all eyes will certainly be on new head coach Adi Hütter and the new players in Eintracht kit. EintrachtTV presenter and stadium announcer Bartosz Niedzwiedzki will introduce the players, the coaching team and the support staff.

The gates of the Commerzbank Arena stadium grounds open on Saturday, 11. August 2018 at 11 a.m. The sports departments of Eintracht Frankfurt e.V. will once again be offering a host of hands-on activities in various sports, and many of Eintracht's partners will be presenting themselves in the area in front of the main stand. Of course, Attila the golden eagle will also be there with falconer Norbert Lawitschka.

And there will also be sporting action, as the whistle blows at 1pm for the season-opening B Junior Bundesliga match between Eintracht Frankfurt and SSV Ulm 1846 on the forecourt of the arena. An exciting analogy, because as is well known, Eintracht's professional team will also start the cup season a week later, on 18 August at 3.30 pm, with an away game at the regional league team from Ulm.

The golden "pot", by the way, is also the focus of the day: "The cup belongs to the fans" has Eintracht Frankfurt proclaimed this year's cup triumph. For this reason, there will be an opportunity for visitors to take photos of themselves and the trophy until the end of the event (3pm).

Admission to the Eintracht Family Day is free. Visitors are asked to come to the arena by public transport if possible. Vehicles can otherwise be parked for a fee in the Waldparkplatz and the Gleisdreieck car park. The exact schedule will be announced in the coming weeks