The curtains open again at CinemaxX Offenbach
from FFM Aktuell 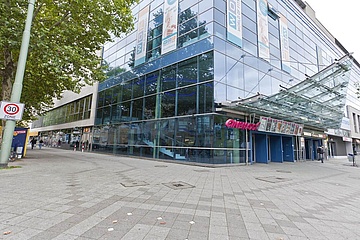 Well, do you miss the cinema that much too? According to a survey by S&L Research, 99% of moviegoers said they miss the cinema a lot. When asked what they miss most about the cinema, the cinema fans surveyed said "the atmosphere/feeling" (40%), followed by "big screen/picture quality" (30%).But the communal experience is also missing - not only the shared company of family and friends (21%), but also the shared "experience" of a cinema film with other viewers (8%).

Even if many in this survey stated that the now again allowed cinema opening as too early, the joy is great for most. Also in our region, cinema fans can rejoice: with the CinemaxX Offenbach, another movie theater opens its doors again on 21.05.2020. Of course, the "new normality" will also be introduced here first. But in compliance with the hygiene and protection measures, it is again possible to enjoy movies on the big screen. Admittedly, it will still be a while before really new films hit the cinemas. But the waiting time for new blockbusters will be shortened at CinemaxX with audience favourites that were showing before the cinema closure due to the Corona pandemic. The German comedy "Nightlife" is among them, as is the animated flick "Onward: No Half Measures" or the Oscar winner "Parasite."

"We are extremely pleased to be able to reopen our cinema doors. As a multiplex cinema, we have spacious foyers and halls, which are now equipped with guidance systems and distance markings. We are also well equipped technically with e-tickets and contactless payment methods at every box office. With our film program, we have put together a colorful selection that holds the right highlight for big and small cinema fans," explains theater manager Beatrice Hitschrich.

The world has changed - so has the CinemaxX Offenbach.

The core component of the reopening is a safety and hygiene concept that CinemaxX developed together with its parent company Vue International, which meets the official legal requirements and is in line with the protection and hygiene plan of the cinema associations.

In the entire cinema and thus also at the entrance and exit to the cinema halls as well as at toilet visits during the performances, a mask obligation (mouth-nose protection) applies for cinema guests. The mask may be removed as soon as the assigned seat in the auditorium has been taken. Cinema employees act at box offices and counters behind hygiene walls or wear a mouth-nose protection.

Customers are asked to book tickets primarily online. Contactless ticket verification will be done at the time of admission. Card or contactless payment will be available at all box offices - cinema box office and food counters.

In the auditoriums, auditorium occupancy has been limited and seats are fixed. Between seats, which are bookable online as two blocks, corresponding seats are blocked for the required spacing and remain vacant. Spacing rules are supported by second-staggered movie starts and exits.

Spacing rules in all common use spaces and restrooms are regulated by markings on the floor as well as barrier tapes. Of course, cinema guests and employees are informed about the hygiene recommendations of the federal government with regard to the reduction of infection risk (hand hygiene, cough and sneeze label, etc.) via notices and are also informed about the protection and hygiene concept via the website and social media.

All information is available at www.cinemaxx.de/gesundbleiben

Cinema tickets from 4,99&euro;* are available in advance.

(*Price applies to all 2D films. 3D films and special events only at extra cost. Not combinable with further discount promotions)