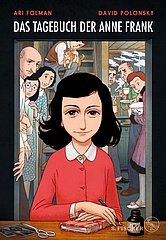 (kus) Anne Frank's diary is now available in an entirely new genre: "The Diary of Anne Frank: Graphic Diary" is a combination of original text and vivid, dramatized dialogue.

Impressively and sensitively illustrated by multi-award-winning Ari Folman, director and scriptwriter, and David Polonsky, illustrator. Both are known for the film "Waltz with Bashir," which was nominated for an Academy Award and won a Golden Globe.

As vividly as Anne Frank writes about life in the backhouse, the fear of being discovered, as well as her feelings growing up, the illustrations are immediate - almost cinematic. Media scholars V&eacute;ronique Sina and Ole Frahm will speak this evening about this special new publication on the 70th anniversary of its first publication. Jakob Hoffmann will moderate the conversation.

The book launch is on Monday, October 30, at the Stadtbücherei Frankfurt, Zentralbibliothek, Hasengasse 4. Start time is 7:30 p.m., admission is free. The event is a cooperation with the Jewish Community, S. Fischer Verlag and the Anne Frank Fonds Basel as part of the Jewish Cultural Weeks