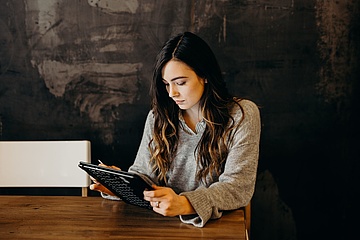 (ffm) Some time ago, the Jüdisches Museum Frankfurt developed a digital strategy that has been successively implemented since 2016. At its core are educational offers with which the museum transfers its topics into the digital space.

Digital Offers on the Corona Crisis

For some time now, the Jewish Museum Frankfurt has reached significantly more visitors with its contributions on the social media Facebook, Instagram, Twitter, and Youtube than in the physical space. In light of the museum's closure, digital communication has now been intensified and a series of posts has been developed addressing specific aspects of Jewish cultural history with a view to the current crisis. A first series of contributions dealt with the topic of "Hygiene and Ritual Purity in the Jewish Tradition". Another contribution is aimed at children and parents, whose creative sense is particularly in demand under the given circumstances. A separate shadow theatre competition was initiated for them.

"Tachles - Videocast on the Crisis"

A special role among the digital offerings on the current situation is played by the new videocast "Tachles on the Crisis," in which the director of the Jewish Museum, Mirjam Wenzel, talks with personalities such as the publicist and poet Max Czollek, the politician and psychotherapist Nargess Eskandari-Grünberg, the philosopher Rainer Forst, the journalist Tobias Rapp, the political scientist and rabbi Elisa Klapheck, the lawyer, philosopher and publicist Michel Friedman, the president of the German Society for Catastrophic Medicine and member of the German Ethics Council Leo Latasch, the writer and historian Doron Rabinovici, the actress and director Adriana Altaras, the professor of American literature and literary studies at the University of Tübingen Michael Butter, the professor of Jewish book arts and museum director &Eacute;mile Schrijver, and others will speak.

On the Google Arts & Culture platform, the Jewish Museum is currently presenting part of its collection, opening up a glimpse into the currently closed Museum Judengasse regardless of time or place. Other displays are dedicated to Anne Frank's family and the expressionist painter Ludwig Meidner. On the occasion of the 100th birthday of Marcel Reich-Ranicki, the museum will publish another online exhibition on the various portraits of writers by the famous literary critic.

Together with the Historical Museum, the Jewish Museum has developed an app that guides visitors to places of migration in Frankfurt's urban space. The app is available for download free of charge from the App Store or Google Play and can also be perceived without a city walk on the sofa at home.