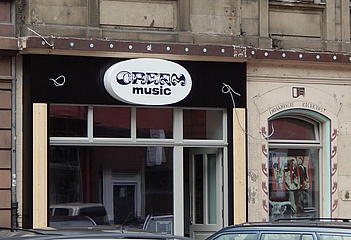 The move had been under discussion for some time. Back in December 2016, it was reported that the legendary music store CREAM MUSIC would have to move away from the Bahnhofsviertel. But Bernhard Hahn has not given up hope of being able to keep the location after all. During our last visit in September 2017, he expressed confidence that the last word was far from spoken. No wonder, after all, the music store and the Bahnhofsviertel have a history that goes back more than 114 years. The operators have remained committed to their neighbourhood in recent years and have not simply capitulated to the problems brought about by drugs and crime.

Despite this, the time for change has now arrived, not least because of a pending rent increase. For "The Home of Rock`n`Roll has moved." As of now, Musikhaus Hummel will open its doors in Sachsenhausen. And with that, an era comes to an end - but a new chapter is also opened. The new store at Seehofstraße 6 will be very clearly based on the premises from the Bahnhofsviertel. At the moment, there is still a lot of work going on in Sachsenhausen, but it is already clear from the exterior façade that charm and character are to be retained just as customers know them.

There will be a little more space available, which will have a positive effect, especially in the screening room. The connection to public transport is given by the nearby tram station and the proximity to the S-Bahn (local train station). The parking situation is also a little more relaxed than in the Bahnhofsviertel, for example with the Colosseo underground car park at Walther-von-Cronberg-Platz, which is within easy walking distance.

Of course, this move is a little painful given the store's long tradition. But it also brings with it many opportunities that will hopefully see this legendary store remain in our city for a long time to come.

You can read more about CREAM MUSIC HERE.