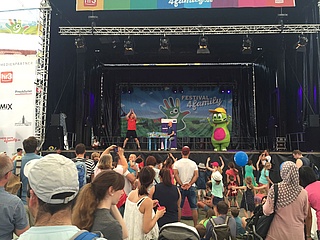 What a party! And Petrus played along, too. He gave the organizers of the now seventh FESTIVAL4FAMILY on Sunday bright sunshine. Around 30,000 visitors from the entire Rhine-Main region took advantage of the fantastic weather to enjoy the great stage programme, the many hands-on activities and the sporting events. Frankfurt-tipp.de was also present with a stand. Visitors were not only able to take part in our attractive annual prize draw (Where you can of course also take part HERE). Soccer-enthusiastic gamers also had the chance to play on the X-Box with Benedikt Saltzer, one of Germany's most successful FIFA players, who is now under contract with VfL Wolfsburg as an e-sportsman, and get some valuable tips from him.

The popular hr3 presenter Tobi Kämmerer led through the stage program, who proved at the latest when he was on stage together with children's musician Oliver Mager and mascot Kruschel that he was the best choice for this job. Also really inspiring on the main stage was the 11-year-old "The Voice Kids" winner Sofie, who performed really challenging songs like "Halleluja" or "Je ne regrette rien" with a crystal-clear voice and caused many a goosebump moment. But also the other guests, like the popular "The Voice" winner Jamie Lee, the logo! presenters Jennie and Tim or the Star Wars heroes of the 501st Legion were enormously well received by the young festival audience.

Kudos to the Orga-Team, all helpers and partners, who made this festival again in 2017 a really great fun for the visitors. When you saw how enthusiastically the little ones took advantage of the many offerings, you knew that all the efforts involved in stemming such a festival were really worth it. We will definitely be back in 2018! Hopefully you will too!

More info can also be found at: 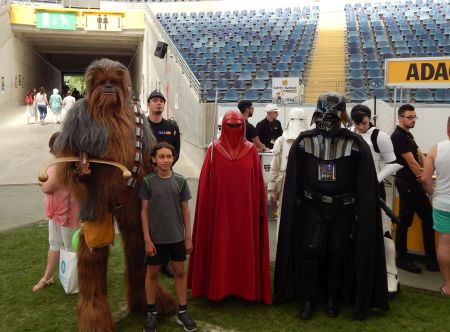