The ffm.de app is now barrier-free
from FFM Aktuell 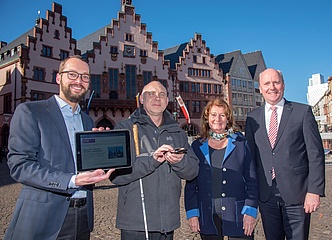 (ffm) The participation app ffm.de of the city of Frankfurt am Main is now barrier-free and thus easier to use for people with impairments. This makes it possible for a larger group of citizens to use the defect reporter to notify the municipal offices of potholes and littering, for example, or to submit their own suggestions via the ideas platform.

"We are making citizen participation even easier via modern channels," says Jan Schneider, the department head responsible for municipal IT. "We want to be a pioneer in mobile communication with our citizens and are swiftly implementing the ordinance on barrier-free information technology."

Social Affairs Director Daniela Birkenfeld emphasizes: "The optimization of the app is an important contribution to inclusion. Our declared goal is the active participation of all people in Frankfurt. With this, we are realizing this in another area. Inclusion now also takes place mobile, anytime and anywhere!" Mayor Uwe Becker describes the ideas and comments of the citizens as important suggestions for the work of the municipal offices: "It is therefore important that the platform is also accessible to everyone. I call on people to make lively use of the participation opportunities and to take an active part in shaping the future of our city."

The city has been offering a digital citizen participation platform on the Internet since 2014 under the title "Frankfurt asks me". Key components are the deficiency reporter and the ideas platform. Since 2019, the offerings can also be conveniently used on mobile devices via an app. The accessibility standards applied to the web platform have now also been implemented for the app. Among other things, it has been adapted so that it harmonizes well with speech output assistance programs. Contrast and readability have also been improved, and the font size can now be enlarged more than before. The size of buttons and icons has been reviewed, and click paths have been simplified. The optimisation of the app was financed by the city's Inclusion Unit and implemented by the Office for Information and Communication Technology. The barrier-free design was tested with the active participation of visually impaired people. "The barrier-free further development of the app is a welcome step forward. Now people with different handicaps can also actively participate," explains Karl Matthias Schäfer from the Blind and Visually Impaired Association of Hesse. An addition to the FFM.de app with the display in easy language is currently in preparation.

With the development of the app, the city of Frankfurt am Main had responded to the request of many citizens last year and made it easier to use with mobile devices. For example, anyone who notices a pothole while out for a walk can take a photo of it with their smartphone and post it directly to the defect report. If desired, the app will automatically add the location. Reports can be made in the categories of rubbish, road damage, defective road signs, traffic lights, street lighting and defective playground equipment and park benches. A category for accessibility is also planned. As the report progresses, the app can be used to see what the current processing status of the report is. The input of suggestions on the ideas platform works in a similar way. Ideas from other users can also be supported in the app. The app has already been downloaded more than 1500 times. More than 4100 defects have been reported via it so far and 222 ideas have been posted.

The new version of the app is available for Apple (from iOS 10) and Android (from Android 5.0) and can be downloaded now for free in the respective store.