The Film Museum has a new director
from FFM Aktuell 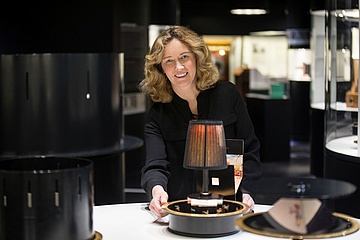 Welcome to Frankfurt! After Claudia Dillmann had said goodbye as director of the Filmmuseum in September last year, Ellen M. Harrington has now taken over the post. She took office on January 2, 2018 and has now also introduced herself to the public at a press conference on Tuesday, January 16.

One reason Harrington chose Frankfurt, as she emphasized right at the beginning, is the outstanding international importance and excellence of the Deutsches Filminstitut / Deutsches Filmmuseum, "but of course there is always room for further development. I've resolved to make some visible improvements to our public activities, to communicate the mission and concern of the Deutsches Filminstitut more clearly - both in the classic media and via digital platforms." So she doesn't want to rest on the success of her predecessor, but to expand it even further in the spirit of the museum and the institute. Dialogue with the museum's visitors is particularly important in this regard: "The public is changing. That makes it all the more important to work continuously on this and to open up new ways of retaining our visitors."

But in other areas, too, the signs are pointing to change - or rather, evolution - under Harrington. For example, she said, she is already in the process of acquiring important new collections. The goal, she says, is to improve the means of preserving them and sharing them with visitors, both on-site and online. Even more than before, the museum's successful and exemplary exhibitions will be sent on tour internationally, Harrington said.

On behalf of the city, the new director was welcomed by the head of culture of the city of Frankfurt am Main, Dr. Ina Hartwig, who is also chairwoman of the board of directors of the Deutsches Filminstitut: "I warmly welcome Ellen M. Harrington to Frankfurt. As the new director of the German Film Institute and Film Museum, Ellen M. Harrington is an excellent fit for the international city of Frankfurt. With the American and specialist for European film, we welcome a highly competent expert from the world capital of film, who will certainly contribute in an inspiring way," said Hartwig.

Dr. Nikolaus Hensel is also pleased for the German Film Institute, of which he has been an honorary board member since 2006: "Ellen Harrington's worldwide network, her professional expertise and her management experience will enrich the house."

Who is the woman who wants to bring a breath of fresh air to the Film Museum? Ellen M. Harrington, a film and literature graduate, worked for the Academy of Motion Picture Arts and Sciences in Beverly Hills from 1993 to December 2017. Prior to that, she worked for nonprofit film initiatives and in film production. She was director of exhibitions and film events and founding director of the Academy's International Outreach Program, which also awards the Oscars®. With the founding of the Academy's own Film Museum in 2013, she joined the planning staff of the major project as Director of Exhibitions and Collections, and since 2015 has been responsible for the development and design of the museum's collection.

Over the course of her career, Ellen Harrington has curated some 50 film exhibitions for the Academy and for partner institutions, as well as being responsible for another 30 exhibition acquisitions. She has also produced more than 500 film screenings for the Academy, international film institutions and festivals, including retrospectives, tributes and educational events. She has collaborated with the Deutsches Filmmuseum on several occasions, most intensively on the exhibition "And the Oscar® goes to. 85 Years of &sbquo;Best Film'", which the Deutsches Filmmuseum realized in Frankfurt in 2012. The polyglot US-American, who speaks fluent French, Spanish and Italian in addition to her native English, is currently devoting much of her time to learning German.

We wish Ellen M. Harrington all the best in her new field of responsibility and say: Welcome to our beautiful city of Frankfurt!