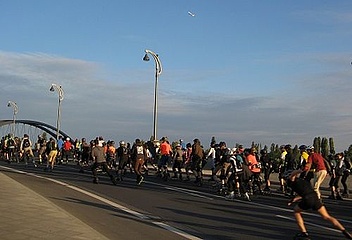 Update: The first tour of Tuesday Night Skater, scheduled for Tuesday, March 27, has been cancelled due to weather and rescheduled for next Tuesday, April 3.

The tour will kick off at 8:30 p.m. at Hafenpark on Mayfarth Street.

They're rolling through town again! Even if the temperatures aren't quite as spring-like as hoped, the Tuesday Night Skaters will take to the starting line for the first time this year on Tuesday, March 27, and thus ring in the 20th tour season in total.

At 8:30 p.m., the first Tuesday Night Skaters brave enough to brave the cold will start. From this date on, the skaters will then meet every week at the now tried and tested start and finish point, the Hafenpark (Mayfarthstraße) at the Osthafen, where the tour will end again at around 11pm. The prerequisite for each tour is, of course, that the weather conditions allow safe skating.

Sports Director Markus Frank is looking forward to the start of the season: "The weekly tour of the inline skaters is a traditional event and shows the diversity of sports in Frankfurt."

The Sports Office as organizer of the Tuesday Night Skater rides thanks the organizer Dirk May for the successful and trusting cooperation and his commitment, which has made this event series possible for 20 years.

This year there are 15 different tours, which have a route length of 32 to 37 kilometers. On the first Tuesday of every month, there are TNS-light tours, whose course, distance and speed are aimed primarily at beginners and returning riders.