The foolish season is officially opened
from FFM Aktuell 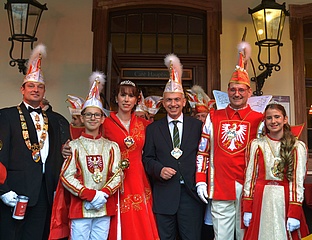 Despite grey, rainy weather, the 11.11. for many Frankfurt a reason to celebrate: the fifth season was opened punctually at 11:11 by the Grand Council of Carnival Associations Frankfurt am Main together with their honorary president, Frankfurt Mayor Peter Feldmann. Even though the weather showed its particularly unpleasant side, there were two real premieres to look forward to this year: Firstly, the first Frankfurt carnival tram was unveiled, which will run along line 11 during the foolish season. Together with the RMV, the colourful carriages were designed, decorated with the emblems of all the city's carnival clubs.

After the presentation, Mayor Feldmann drove the tram to the Römer in person, of course not without expressing his thanks to the VGF and the Grand Council - in rhyming form, as befits the occasion:

"Thanks to VGF and Grand Council
50 clubs indeed
are immortalized on this track
You did a great job!
VGF and Großer Rat
bring'n Frankfurts Fastnacht voll in Fahrt"

The second premiere was that the campaign opening was celebrated for the first time centrally in the heart of the city, at the Hauptwache. Here there was a carnival program with music and dance on a stage until 4 pm. Information stands of some sponsors and supporters of the Frankfurt carnival around the carnival stage rounded off the events. For Feldmann, this kick-off to the carnival season is an important sign: "With all the weirdos and crazies in this world, it's important that we don't let them spoil our fun and celebrations." And so, especially during the introduction of the new prince and princess, "His Tollität" Matthias I. and "Her Lieblichkeit" Conny I., joy and fun were in the foreground - which also transferred to the audience standing in the rain.

Then it became clear how appropriately the motto of the 2017/2018 campaign is chosen: "Frankfurts Leut` e Freud` zu machen, bringt unser Narrenherz zum Lache!". We can look forward to a few colourful and cheerful months, which will mean a very busy schedule for the prince and princess. But with the support of family, friends and colleagues, it should be guaranteed that the dream that came true with the appointment as prince and princess will also end as such on Ash Wednesday.

The prelude has - despite rain - already succeeded once. Axel Heilmann, president of the Great Council was pleased: "Finally it is so far! We fools, whether in the clubs or in the Grand Council, have of course been totally looking forward to the 11.11. The opening of the campaign with the new carnival tram, open-air stage at the Hauptwache and our great and amiable Frankfurt prince pair as well as children prince pair, we are now well prepared to go into the many events in all Frankfurt districts. Until Ash Wednesday, the Frankfurter Fastnachter will do everything so that the guests in the halls and also &sbquo;uff de' Gass', with a lot of cheerfulness and &sbquo;Spaß an de Freud' can celebrate."