The fools storm the Römer
from FFM Aktuell 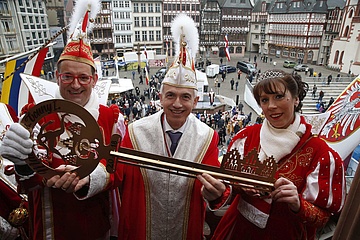 Last weekend, this year's carnival season in Frankfurt reached its first major climax. Before the popular parade through the city centre on Sunday, which was again celebrated by thousands of visitors despite the uncomfortable weather, the children's parade and the storming of the city hall were first on the agenda on Saturday. Throughout the weekend, the motto of this year's Frankfurt Fassenachts campaign "Frankfurt's Leut' e' Freud' zu machen, bringt unser Narrenherz zum lache" ("Making Frankfurt's people happy makes our fools' hearts laugh") was perfectly implemented - even if it wasn't always easy to laugh off the shivering in the cold, snow and rain.

The traditional storming of the town hall once again attracted many Frankfurt residents to Römerberg. After much music, cannon shots and battles of words with the Great Council, Lord Mayor Peter Feldmann had to surrender to the carnival superiority again this year. After successfully storming the town hall, he handed over the golden key of Frankfurt's Römer town hall to the prince and princess Mathias I and Conny I, who thus took over the reigns of the city and town hall until Ash Wednesday. The gatekeepers were instructed, "one may open the doors and gates to the Römer now and let the foolish people into the Römerhallen".

On Sunday then started at 12:11 clock the great parade through the Frankfurt city center. Mayor Peter Feldmann led the way with Mainz Mayor Michael Ebling in a convertible. Behind them, 92 associations with 68 joke and committee floats, 41 guards, 12 motif floats of the Great Council, 17 bands and marching bands from Frankfurt, the Rhine-Main region and Baden-Württemberg, 448 minstrels, 6 horses and 6 cannons meandered through the city. In total, the procession comprised well over 3000 participants. The many spectators at the roadside were pelted with sweets for coming. The mood was exuberant and the grandstand completely sold out. And there someone again says, Frankfurt can not carnival!

The city leader, at the same time honorary senator of the Great Council, said at the end of a more than successful event: "That was again a terrific fool weekend in one of the Fassenachts strongholds of Germany. My thanks go to our clubs whose creative efforts are inimitable." We are happy to join in the thanks