The Frankfurt Book Fair will be colourful: Cosplay on 8000 sqm
from FFM Aktuell 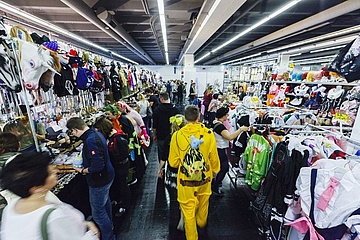 The enormous versatility on offer at the Frankfurt Book Fair is evident again this year in Hall 1.1 with Gaming Zone, Maid Caf&eacute; and Game of Thrones costumes, the Cosplay Ball, the Harry Potter World Record and the 12th German Cosplay Championship. In doing so, the Book Fair is reacting to the enormous success of the previous year and has significantly increased the range on offer: : In Hall 1.1, 8000 square metres are now available to all cosplayers, comic and manga fans, gamers, illustrators and fantasy lovers during the fair weekend.

- maid and host cafe<x>Ampersand</x>eacute; with service by Maido no Kisetsu

Cosplay Ball of the Dreaming Books

- a great premiere this year with the theme "Are you still reading or are you already dancing?“. For the first time, in cooperation with the Frankfurt Book Fair, the Cosplay Ball of Dreaming Books will take place at Frankfurt's Goethe University. In addition to selected music from film, anime and musical, cosplayers can expect a sumptuous dinner.

20 years ago Harry Potter and the Philosopher's Stone was published in Germany. Around

34 million copies sold later, the Frankfurt Book Fair together with Carlsen Verlag wants to celebrate this success and set a new world record: For this, at least(!) 1000 people in Harry Potter costumes must come together in one place. Those who want to be there must have the following features: the lightning-shaped scar on the forehead, the round glasses frame on the nose and a black magic cloak around the shoulders.

As a special guest, book artist Iacopo Bruno is expected, who has designed the new Harry Potter edition and will be happy to sign it. The event will be moderated by Matthias Wieland.

The German Cosplay Championship (DCM) will take place for the 12th time this year. Here, the best cosplayers who have qualified for the finals in six preliminary rounds will crown their champions during the Frankfurt Book Fair. The live stream of the finals can be accessed at www.picarto.tv/cosplaydcm.