The Frankfurt Christmas Market is open
from FFM Aktuell 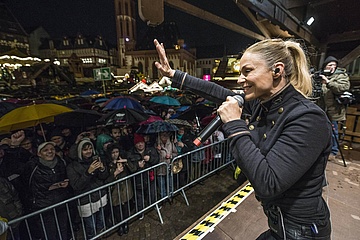 In pouring rain, this year's <link _blank>Christmas market opened on Monday. But despite the inclement weather, many Frankfurt residents made it a point to be there for the first lighting of the Christmas tree and the subsequent performance by pop singer Michelle. The Römerberg turned into a veritable sea of umbrellas around 5 pm. The mood of all present was not saddened, however, but extremely exuberant. And so it was also taken with great humour that the Christmas tree accidentally lit up briefly for a few seconds during the speech by Lord Mayor Peter Feldmann.

"Every year our Christmas market is not only a culinary and visual highlight, but also a place of encounter. This is where friends, colleagues or even people who haven't seen each other for a long time meet," said Peter Feldmann about what makes Frankfurt's Christmas Market so special. He also thanked Tourism Director Thomas Feda and his team for the excellent preparation of the market and Mayor Bernhard Halbe from Schmallenberg for the Christmas tree. Thanks to numerous light-emitting diodes, the tree shone in all its glory for the first time at the opening.

Before the pop singer Michelle musically ushered in the pre-Christmas season, Feldmann urged visitors to get to know the city of diversity and cohesion better: "Frankfurt has so much to offer its residents and guests. Hardly any other city is as modern, active and yet traditional and down-to-earth as our metropolis on the Main." And he stressed once again that even in times of terror, we will not let it spoil our celebrations and good mood.