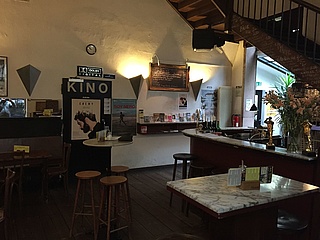 The pandemic and the accompanying closures of cinemas are a real disaster for filmmakers, distributors and of course for all movie theaters. And at the moment, unfortunately, there is still no sign of when the situation will ease and films can be shown in cinemas again. For some months now, some film distributors have offered to support the cinemas by streaming films via the cinemas' websites for a fee and then allowing the cinemas to share in the proceeds. Frankfurt's Mal Seh'n Kino has also taken part in this campaign.

Since April 1, the popular arthouse cinema in the Nordend has expanded its online offering with its own streaming portal: "Mal Seh'n on Demand" has been launched. This streaming portal is intended to focus on the Hessian film scene and support both newcomers and long-standing filmmakers. One thing is particularly important to the creators of the portal: such a platform is not meant to be a replacement for a theatrical release, but rather a supplement once the festivals and cinemas have run their course.

Because the actual cinema experience simply cannot be replaced - no matter whether it's for a documentary, a low-budget drama or a big blockbuster. But especially at a time when cinemas cannot provide a platform for regional filmmakers, new ways must be found to give them the attention they deserve. This is where the streaming service of the Mal sehn` cinema should help.

The service is available via the homepage of the Mal Seh'n www.malsehnkino.de under the heading "Mal Seh'n on Demand".

For the launch from 1.04. the following films are available for viewing

(Ticket price € 5,90 for a 24-hour rental period, A free registration at Vimeo is required).

THE 25th. YEAR - OF THE POETIZATION OF THE WORLD

A documentary film by Otmar Hitzelberger about the theatre Willy Praml, D 2019, 90 min.

CORONA - WHEN THE WORLD STILL STANDS - WE ARE NOT ALONE (Partial English. OV)

A very special film tip is the documentary SILENCE RADIO, which will be released on 15. April 2021 as a German premiere across participating cinemas, including on the Mal Sehn' platform. In addition, there will also be a premiere film talk in the live stream from the cinema of the Deutsches Filmmuseum in Frankfurt. And that's what the film is about:

In March 2015, Carmen Aristegui, the best-known voice of independent journalism in Mexico, is fired from MVS radio station with her team due to political pressure and false allegations, and charged. The next day, more than 200,000 people demonstrate and sign a petition demanding her return to the station and an end to censorship. Despite this extraordinary mobilization, the station does not back down.

The documentary SILENCE RADIO delves into the long and dangerous struggle of Carmen Aristegui. It is a struggle against the monopolistic concentration of media in Mexico and against an authoritarian and corrupt political system undermined by threats and intimidation from drug cartels. With extraordinary courage, Carmen and her team face the daunting task of creating a space of free and independent expression themselves, so that they can continue to reach people and bring attention to the ills of their home country.

Questions can be emailed in advance to info@jip-film.de

live stream: Via Cinemalovers and the YouTube channels from the German Film Museum and jip film & distribution.

The film talk will be in Spanish and German.