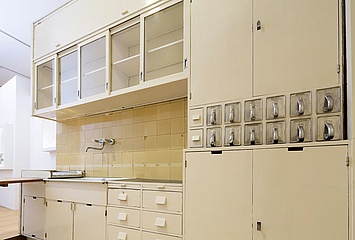 Margarete Schütte-Lihotzky's "Frankfurt Kitchen" is one of the most outstanding examples of the Frankfurt Modernist project of the 1920s. As the first type of pure working kitchen to be produced on a large scale, it became a model of typified design worldwide and changed living permanently.

The Museum Angewandte Kunst, which has always focused on the importance of Frankfurt and the region for design modernism, is now showing a restored example of the "Frankfurt Kitchen" for the first time in its permanent exhibition Elementary Parts. Instead of a full reconstruction, the museum presents the special features of the "Frankfurt Kitchen" through a special room situation, original kitchen modules, continuing architectural elements and visual contextualizations.

2015, the Museum Angewandte Kunst was given the opportunity to expand a complete, largely unchanged "Frankfurt Kitchen" in Wittelsbacher Allee. ABG Frankfurt Holding, the owner of the kitchen, made it available to the museum on permanent loan. Christian Dressen, a qualified conservator at the Museum Angewandte Kunst, took on the complicated task of completely dismantling the kitchen on site, as well as the subsequent restoration work, which took more than two years. He refrained from extensive retouching and instead restored the last original paintwork by exposing and cleaning it. Traces of use were also deliberately left visible.

In the exhibition, the kitchen elements are arranged into a room according to the original floor plan. The front wall of the kitchen, which in the original room situation contained a window overlooking the garden, remains open and provides views into the museum room; from the outside, glimpses of the kitchen's construction can be seen at this point. As a special feature, the original floor and wall tiles are also part of the construction. This creates an authentic overall impression of Margarete SchütteLihotzky's design achievements.

The "Frankfurt Kitchen" is an important conceptual element of the overall design of the "New Frankfurt" project. The Viennese architect Margarete SchütteLihotzky (1897-2000), the first Austrian woman to graduate in architecture, is appointed to the typification department of the Frankfurt Hochbauamt in January 1926 and becomes the specialist for the kitchens of the new buildings. More than 10,000 examples of the efficiency-oriented "Frankfurt Kitchen" are produced for almost all housing developments. There are around 30 variants, all no larger than six to seven square metres. They are an elementary requirement for the spatial program of the new low-cost Frankfurt reform apartments, in which the bourgeois living room is to play the central role, not the proletarian eat-in kitchen. Because of its small size, the kitchen is to be superseded as a lounge and replaced by other rooms inside and outside the apartment.

The basic principle of the kitchen was short distances and areas of reach. The width of the kitchen was calculated so that one only had to turn from the cupboard and sink wall to the hearth wall. Extensive organisation systems were also designed to make kitchen work more efficient. Margarete Schütte-Lihotzky had in mind a kind of kitchen laboratory, which was expressed in the numerous chutes, glazed cabinets and a seated workstation.

Schütte-Lihotzky emphatically rejected the thesis put forward by some representatives of design modernism that what is functional is also beautiful. She saw the kitchen decidedly as an aesthetic design work. As in the entire "New Frankfurt" project, colour played a major role in the kitchen. The first sample kitchens were blue, later other muted colours were added, but also white. The kitchen floor consisted mostly of brownish Solnhofen tiles, whose natural pattern contrasted with the monochrome lacquered cabinets. The standard fittings of the Building Department were used as fittings, and for the drawers prismatic wooden blocks with a lower recessed grip, so that the geometric, cubic impression of the kitchen was further reinforced. In the course of the museum's research, plan drawings were found that envisaged elements of the Frankfurt kitchen for shop construction in the housing estates. The kitchen modules were thus also intended as furnishings for public areas.

An essential aspect of the "Frankfurt kitchen" is its reception history. In addition to its function as a model for later fitted kitchens, its contemporary reception is of particular importance, for the paradigm shift in the living area initially met with far from undivided acceptance. Schütte-Lihotzky promoted this in numerous lectures and publications. Thanks in part to the intensive exhibition and advertising activities of the housing department under Ernst May, the "Frankfurt Kitchen" became internationally known.

More information can also be found at: www.museumangewandtekunst.de