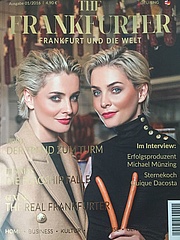 With THE FRANKFURTER, a magazine has gone on sale that sees Frankfurt and the Rhine-Main region as an international hotspot in the world. The city is - as so often quoted - gateway to the world, is international, cosmopolitan, cosmopolitan. This should also be reflected in this magazine, which is therefore also published in two languages. The English translation of the articles is intended to reach not only Frankfurt residents but also people who are guests here or have recently moved here from other countries. The magazine focuses on lifestyle, design, culture, enjoyment, business and finance as well as exciting news and stories from and about Frankfurt-Rhine-Main. The first issue deals, among other things, with the trend of residential towers, whereby the new Henninger Turm naturally has a very special place. The Frankfurt game developers Crytek are visited and the Frankfurt-born producer and photographer Michael Münzing is introduced in an extensively illustrated interview. And Frankfurt's export hit, the Frankfurter sausages, are of course not to be missed. In keeping with the magazine's layout and target group orientation, however, they are not simply presented like that, but by the modeling Meise twins. The two young ladies were attractively staged in the Kleinmarkthalle at Frau Schreiber, among other places.

THE FRANKFURTER is primarily aimed at a well-heeled clientele, but also repeatedly tries to do the splits to reach a broader readership, for example when staff from Frankfurt museums are presented. The layout is of high quality and the bilingualism lends the whole thing an additional appeal. The magazine is to be published quarterly from now on. The price of 4.90 euros is not too high and more than reasonable in view of the volume. So if you want to take a look, you can find THE FRANKFURTER in well-stocked magazine stores now.