The Goetheturm will be rebuilt quickly
from FFM Aktuell 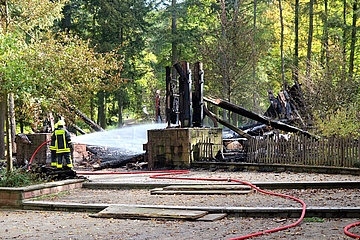 For many Frankfurt residents, Thursday started with a lot of melancholy when they learned that the Goetheturm, a highly frequented and very popular landmark of the city, burned down. We told you about that HERE.

For most - including Lord Mayor Peter Feldmann - it was quickly clear: The tower must be rebuilt as soon as possible. And that's why the city of Frankfurt has launched a fundraising campaign for its burned-down landmark.

It is now the third destructive fire this year: on the night of May 1, 2017, the wooden Morning Dew Pavilion in the Korean Garden had already burned down, and a month later it hit the water pavilion in the Chinese Garden in Bethmann Park.

(kus) Mayor Feldmann reacted to the news with anger and determination. "If a suspicion of arson is substantiated, that criminals in our city are burning down a landmark such as the Goetheturm, we will show the full force, our police will pursue the perpetrators and bring them to justice. I will do everything I can to rebuild the Goethe Tower as quickly as possible."

For Feldmann, it is clear: "This morning, many people and initiatives reached out to me to get involved in the rebuilding. People and initiatives that once again make clear the cohesion of our city and fill me with pride. I name as examples the Chamber of Crafts, the Bild Zeitung, the Nassauische Sparkasse, our Eintracht, the Frankfurter Sparkasse, the Stadion Betreiber Gesellschaft, Ball Communication and many more."

For Environment Director Rosemarie Heilig, it was like a nightmare when she learned of the fire in the middle of the night. She thanked the fire department, which could not save the tower itself, but stopped the strong flying sparks and thus prevented a forest fire. The neighboring Goetheruh restaurant and forest playground will likely be able to reopen as early as this weekend. "I make a firm promise to all friends of the Goetheturm that we will also give the tower back to them."

According to fire department head Markus Frank, the alarm was received by the fire department's central control center at 3.17 am. When they arrived at 3.24, however, the tower had already been burning like a torch. The tar-oil impregnated wood used in its construction in the early 1930s was certainly a contributing factor, he said. "A large contingent of 60 emergency personnel from our professional fire brigade and the three volunteer fire brigades of Sachsenhausen, Oberrad and Niederrad were involved in the operation and their quick and professional action prevented the fire from spreading and thus even worse. I would like to thank the firefighters for their prudent actions," said Frank, the head of the fire department. The Goetheturm was built at the time on the occasion of the 100th anniversary of the death of Johann Wolfgang von Goethe in 1932 and was for a long time the tallest wooden tower in Germany.

Building department head Jan Schneider now wants to clarify with the building inspectorate whether a reconstruction true to the original could still be approved according to today's standards. "A reconstruction according to the old plans is undoubtedly desirable, whether it would also be approvable, must now be examined," said Schneider.

This question will certainly still strongly move the people of Frankfurt, because with the wooden tower in the city forest, many associate very personal memories of childhood trips or the first kiss. "The Goetheturm is also a piece of home for us," said Neu-Isenburg Mayor Herbert Hunkel. He also sees a great willingness to donate in his population.

The Nassauische Sparkasse and the Frankfurter Sparkasse have set up donation accounts at short notice to support the reconstruction in a civic spirit.