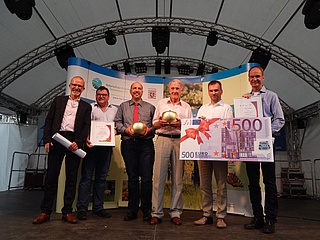 At the Roßmarkt, where the popular cider festival is currently attracting visitors, there were two particularly beautiful golden shining apples to marvel at today. Because since 2007 the Nature Conservation Academy of Hesse, together with MGH Gutes aus Hessen GmbH and the Association of Hessian Cider and Fruit Juice Presses (Verband der Hessischen Apfelwein- und Fruchtsaft-Keltereien e.V.), has been awarding the GOLDEN APPLE once a year for exemplary services to the local orchard meadows. In the first year, there were eight applicants for this award. In 2017, there were now 21 - a good sign that the importance of the meadow orchards is increasingly moving into the collective consciousness. This year, the prize, which is endowed with 1,000 euro, was awarded for the fifth time during the cider festival at Frankfurt's Hauptwache. The festival, a tribute to the apple, cider and the cider city of Frankfurt, has established itself in just a few years as a permanent fixture in the event calendar of the Main metropolis, making it the perfect setting for this award ceremony.

This year, however, there was a premiere at the award ceremony: for the first time, there were two award winners. On the one hand, the meadow orchard owner Jochen Stoos from Allendorf (Lumda) was awarded for his personal commitment around the meadow orchards. And the Friedrichsdorf Landscape Conservation Working Group, which launched the "Apple Day" project, was also presented with the Golden Apple and a cheque for 500 euros. In his laudatory speech, town councillor Stefan Majer praised the passion with which both winners are committed to Hesse's orchard meadows. Not only do they raise people's awareness of the importance of fruit. They also make an important contribution to nature conservation, as orchard meadows are also an important habitat for plants and animals.

We congratulate the award winners and raise our ribs to them!