The GREAT CHRISTMAS CIRCUS enchants its audience
from FFM Aktuell 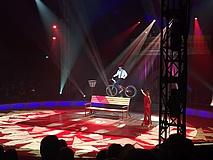 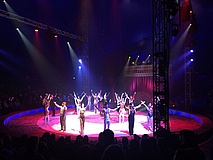 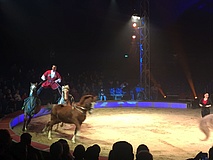 After the great anniversary program last year, the Circus Carl Busch is now back in Frankfurt with the new show. Until January 6, you can immerse yourself in a magical world full of acrobatics, clowning, dance and horse dressage at the Festplatz on Ratsweg. Not wanting to rest on last year's huge success, the circus has brought in some truly spectacular performers to wow audiences for around two and a half hours with an engaging mix of traditional circus flair and contemporary artistry.

While the children got particularly bright-eyed at the horse acts and the performances of Portuguese clown Angelo Chaves, the Changzhi duo from the Chinese State Circus, for example, got loud applause from the adults. But it is also wonderful to watch Guo Zhimin performing pointe dancing on the shoulders of her partner Zhang Jiaxiang. The award-winning Duo Stauberti also provides a real WOW moment in the show with breathtaking perche acrobatics. Dimitr balances a metal bar up to 5 meters long on his shoulder or on his head, while his partner Nancy performs artistic interludes at the upper end of this bar. Really great!

When the Khadikov troupe performs tricks at breathtaking speed on, next to or even under their thoroughbred horses, Kevin Chaves balances on several skateboards or Nancy Stauberti flies through the tent suspended only by her hair, the high quality of this show becomes impressively clear. This was also underlined by Jan Sokolovsky, who delivered greatness with his mountain bike and a park bench.

The only thing this show lacked compared to last year was the Christmas spirit. Aside from the festively decorated foyer and a few Christmas songs played by the six-piece orchestra, the show wasn't really any different from other Circus performances. The anniversary show was a little more atmospheric, with Santa Claus and his reindeer greeting the audience. But this does not change anything about the fact that also at the sixth GREAT CHRISTMAS CIRCUS young and old are entertained really well and are brought equally to the astonishment as also to the laughter.