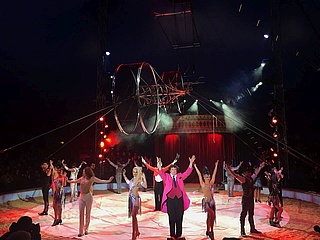 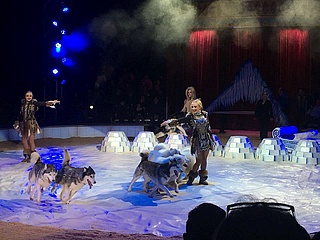 This is the fifth time that the tradition-rich Circus Carl Busch has made a guest appearance in Frankfurt with its Great Christmas Circus. "We always have a very special audience in Frankfurt," director Manuel Wille told us at the program presentation, and junior director Natascha Wille-Busch added: "We feel very much at home in this city." So it's no wonder that they want to treat the Frankfurt audience to a very special show for their small anniversary. The posters promise "The strongest Great Christmas Show ever". And after the successful premiere it should be clear that this has not remained an empty promise.

The anniversary show offers its audience a good mix of breathtaking artistry, family-friendly comedy with Jimmy Folco that also involves the audience, a little magic, and rousing horse and dog acts. Geoffrey Berhault provides the first "wow" moments on the tightrope, when he lands safely on the thin rope again after a somersault or when a skipping rope is used during his balancing act. The handstand acrobatics of Kelly and Alexandra Saabel are fascinating to watch. When their bodies seem to bend effortlessly in the play of light, it is simply beautiful. The first big highlight follows before the break, when the Flying Zuniga from Brazil present two special features in their spectacular flying trapeze act: On the one hand, Marlon Michael dares to perform a triple Salto Mortale while blindfolded - a real goosebump moment that leaves many a mouth wide open in the audience. On the other hand, Joaquim Zuniga, the youngest "flying man" at just twelve years of age, joins the performance and shows that he has fully inherited his family's talent.

Many children then use the break to stand in the ring themselves. In addition, of course, there is also the possibility of the Christmas decorated foyer at the small wooden stalls with popcorn, bratwurst or drinks to supply or to join the popular animal show. After the interval, the audience can expect a concentrated load of magic from the Italian illusionist Jimmy Saylon, who will make his assistants disappear or miraculously free himself from a firmly locked box. The big highlight of this second part of the show is the act on the wheel of death by the duo Vanegas. What the two Colombian artists perform here is simply breathtaking. Great entertainment.

With very traditional circus flair and contemporary artistry, the Great Christmas Circus manages to delight circus fans young and old. Watching children laugh heartily at Jimmy Folco's clowning, light up at the sight of Santa with his reindeer or the lively jumping dogs, while their parents marvel at the acrobatic invitations of the performers, makes you feel that even in times when apps, streams and other modern technologies seem to rule our everyday lives, such traditional entertainment as the circus still retains its magic. Until 07 January, you can see for yourself.

You can also find more background and info HERE in our special.