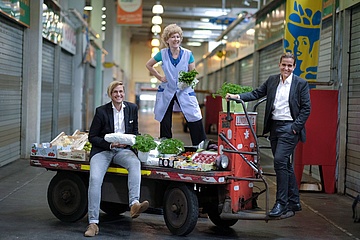 First it was postponed and then cancelled - at least in its usual form, the popular Green Sauce Festival with its large market at Roßmarkt can unfortunately not take place this year. But for the initiators of the festival, Maja Wolf and Torsten Müller, it was clear: It will not work without a festival in this difficult year. However, this will be quite different from usual: Since the theme of competition does not fit into the time this year, the festival team presents a creative alternative under the motto "Together instead of competition". And this also takes the festival back to its beginnings.

Because in 2009, when the Green Sauce Festival first took place as a seven-day festival, the finale was celebrated at the Frischezentrum Frankfurt. And that's exactly where the Grüne Soße Gala 2020 will now be celebrated on 10 October 2020. The show can then be followed via live stream in numerous restaurants and other locations in Frankfurt and the surrounding area. So you can enjoy this year's festival guests in a colorful show all about the Green Sauce - and of course the tasty festival ground, which will be served in all participating locations.

What can you expect at this year's gala? Firstly, of course, some familiar faces, as the show will be hosted by the well-known festival trio Anton Le Goff, Timo Becker and Hilde from Bornheim. They will be accompanied in tried and tested form by their band "Andi und die Gartenzwerge" - Andreas Neuwirth (keyboard), Christoph Maurer (drums), Klaus Bussalb (bass), Gernot Dechert (saxophone) and Christian Lauterbach (guitar). Of course, some guests have been invited to celebrate the Grie Sooß on this evening. And so Lizzy Aumeier, Bodo Bach, Bäppi La Belle, Woody Feldmann, Maddin Schneider, Tamika Campbell as well as Sabine Fischmann & Ali Neander will ensure that this gala will be an unforgettable experience for all involved on stage, in the participating locations and in front of the screens at home, even without the popular festival.

The live stream: be there together!

There are two ways for you to experience the show. The first way is to visit one of the locations and restaurants that will be live streaming the gala. In doing so, each location will indicate in advance how many people can gather on site under current regulations so that spacing and sanitation requirements can be met. The public will be able to book into each venue via the ticketing system. Numerous restaurants have confirmed their participation, already creating nearly 2,000 seats for potential spectators!

The second option is to watch the live stream at home. This is a great alternative for all green sauce fans for whom a visit to the restaurant is just too unsafe at the moment, or who don't live nearby but still want to be there. The streaming link can therefore also be purchased separately and given as a gift to friends and relatives all over the world. The purchase supports of course likewise the Green Sauce Festival, which has to suffer like all culture-creative substantially under the Pandemie.

To go with the link, there's also the ultimate Green Sauce Box for all you at-home gourmets - in two varieties. Packed with all herbs, ingredients and a recipe for the preparation of the green sauce, plus potatoes & eggs, the Green Sauce Box is conveniently delivered directly to your home by mail. Now you can chop and slice together - turning the Green Sauce Gala into your own event at home.

For those who don't have time or don't feel like it, or who find chopping too dangerous, the Green Sauce Box comes with a ready-made sauce straight from the producer, including potatoes and hard-boiled eggs. Of course, the most important ingredient for the evening is always included in both versions: the link for the livestream for the Green Sauce Gala on 10 October at 8pm. So that the box arrives in time in any case, we recommend you to order the Green Sauce Box promptly!

The fundraising marathon "Herbs for Artists" - from 22. August

Even before the Green Sauce Gala starts on August 22, a 7-week fundraising marathon under the motto "Herbs for Artists". Frankfurt is skyline, Ebbelwoi and the Green Sauce, which has long become a cult dish of the Main metropolis. The aim of the donation marathon is to remind people to support the cultural sector, which has fallen on hard times through no fault of its own.

Of course, donations can always be made, whether while enjoying a Grüne Soße, eating a schnitzel or simply thinking about Grüne Soße - quite straightforwardly, directly via smartphone. This appeal for donations is intended to send a signal of support and togetherness in the city of Frankfurt and the region. Every donation counts to preserve the broad cultural landscape! The Grüne Soße Festival itself does not benefit in any way from the telethon. The awareness of the Grüne Soße Festival is only used as a platform to increase the reach for the telethon.

For whom will be donated?

One third of the donations will go to the initiative "Kulturzeiter*in", which supports individual artists and cultural workers of all disciplines in Frankfurt and the Rhine-Main region who are in need.

Two-thirds of the donations go to theatres where public funding at best covers rental costs and which cannot cover their costs due to the Corona situation. A 7-member honorary expert committee decides on the allocation of these funds. The non-profit association Grie Soß United e.V. administers the donation marathon.

You can find more info about the donation marathon HERE