The GrünGürtel in the urban image film
from FFM Aktuell 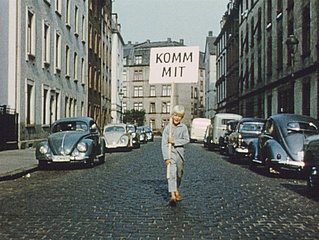 (kus) On Wednesday, December 7, the Institute of Urban History, in a program accompanying the exhibition "Vision and Obligation. Frankfurts GrünGürtel", which the Institute is presenting together with the Environment and Parks Department until 27 August 2017, the GrünGürtel in the city's image film. The curator of the exhibition Jutta Zwilling comments on two films on the subject of urban greenery from the last five decades and, together with the Institute's AV media specialist Claudia Schüßler, places them in their historical context.

Frankfurt am Main was quick to promote the protection of the green spaces surrounding the city. Public relations work for the green systems reached a peak during the time of Mayor Rudolf Menzer (1904-1991), who was responsible for the founding department from 1960 to 1966 with great commitment. The focus of the evening will be the film "Holidays in Everyday Life. A film about gardens, meadows and forests in the big city". Conceived as a feature film with animated sequences, the 40-minute work gives a vivid impression of Frankfurt at the beginning of the 1960s. In addition, excerpts from the 2014 presentation "Urban Development Frankfurt am Main 1990-2015" by the City Planning Office will be shown.