The Hessentag 2020 in Bad Vilbel is cancelled
from FFM Aktuell 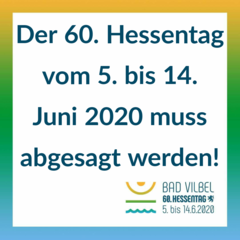 In the past days and weeks some difficult decisions had to be made regarding upcoming major events. Decisions that were not taken lightly by those responsible, but which are unavoidable in the current situation. This has now also affected the Hessentag. The 60th edition of the state festival should actually take place in Bad Vilbel in June. But now the city, together with the state of Hesse, has pulled the rip cord and cancelled the Hessentag completely. </The mayor of Bad Vilbel, Dr. Thomas Stöhr, and the head of the state chancellery, Minister of State Axel Wintermeyer, announced the decision on Thursday. They expressed their regret, but underlined that the health of the visitors and the many employees is an absolute priority: "We would have loved to have celebrated the largest and oldest state festival in Germany, the Hessentag, in Bad Vilbel in 2020. The city of Bad Vilbel as the organizer and the state of Hesse are aware of the special responsibility for a successful and safe Hessentag. In view of the very dynamic and serious situation worldwide and in Germany due to the corona virus, it is not possible to guarantee a planned implementation in the final phase. Supported by new risk analyses and assessments of the World Health Organization (WHO) and the Robert Koch Institute, we consider it right and important to give priority to the protection of risk groups and to ensure that capacities are kept free in the medical sector and in the aid organizations. This also applies to a period at the beginning of June, for which no conclusive assessment can yet be made today. For this reason, the city of Bad Vilbel, in close consultation with the state of Hesse, has decided to cancel the Hessentag this year," said Stöhr and Wintermeyer. </Since many associations, institutions, partners and employees of the city had already been working under high pressure for many months to offer visitors a wonderful Hessentag, the decision was not taken lightly. Nevertheless, there is no alternative to the cancellation. "On behalf of everyone, we would like to thank the Hessentag representative, Claus-Günther Kunzmann and his entire team," said the mayor of Bad Vilbel. </p>

Naturally, the cancellation also involves a lot of costs, but Minister of State Wintermeyer assured: "We will not leave the town of Bad Vilbel out in the rain. We have decided on a partnership approach with regard to the unavoidable costs. Special challenges require special solutions". However, the exact amount of the costs can only be reported once the final statement of account is available.

"For the Hessian state government, the safety of the population has top priority. We ask for the understanding of all those who have worked with exceptional dedication to implement Hessentag 2020 and of all those who were already looking forward to the visit to Bad Vilbel in June," emphasized the head of the State Chancellery.

In five years, however, Bad Vilbel should definitely become the city of the Hessentag: "In view of these special circumstances, we as the state will in any case reserve the next open date for a Hessentag 2025 for the city of Bad Vilbel until the end of this year - we owe this to the many great supporters of the Hessentag," Wintermeyer concluded.