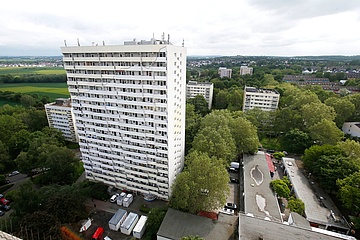 "Urbanity through density" at the Niddaauen

(ffm) What a view! On the horizon the gently undulating Taunus, in front of it the lush green of the Niddaauen, in the back the skyline. Welcome to the roof of the building Berkersheimer Weg 8 in the high-rise housing estate Frankfurter Berg, a jubilarian. For its residents are celebrating the 50th anniversary of the neighborhood on the weekend of June 8 and 9. Lord Mayor Peter Feldmann is the patron of the celebration. We have already paid a visit to the jubilarian before.

A few floors below, the view is still just as beautiful. Heide Kulzinger lives on the 16th floor and was one of the building's first residents. She moved into the three-bedroom apartment with her husband and eight-month-old son in 1970. "The fresh air and the good cut of the apartment" is what the 75-year-old retiree appreciates about the house. The bright rooms, including the kitchen, have generous windows and face outwards, while the lightless bathroom is inside - a modern concept for the time. The 1006 apartments in four high-rise buildings - one with 17, two with 19 and one with 25 storeys - as well as seven eight-storey buildings follow this concept with some modifications. Around 2000 people live in the settlement, which was built using social housing funds in accordance with the urban planning guiding principle of the time, "urbanity through density".

A paradigm that was both a blessing and a curse. At that time, many young families found a modern and affordable apartment, the local recreation area in front of the door. But the face of the settlement has changed. "Today, no one says hello anymore," says Kulzinger. People hardly know each other anymore. In the past, neighbors would have helped each other. But that rarely happens anymore. This impression is confirmed by Michael Bartram-Sitzius, first chairman of the citizens' association Frankfurter Berg. The first families moved out again in the seventies. The housing office occupied the apartments with different tenants who were dependent on social housing. "The big shift in the social mix didn't do the estate any good," says Bartram-Sitzius. And adds: "The then head of social affairs had pushed through the construction of the youth centre against strong opposition at the end of the seventies. This helped to contain the emerging problems somewhat."

In addition, there were other causes. Real estate investor Werner Schleich buys the apartments in the late 80s. A few years later, they fall out of social binding, the rents rose. Schleich goes bankrupt in 2007. For many years before that, the cash-strapped company had hardly bothered to maintain the stock. The result of this interplay of many factors: the estate became a social hotspot.

Today, 450 apartments belong to GWH Wohnungsgesellschaft Hessen, a Helaba subsidiary, the rest are privately owned. GWH manages two high-rise buildings and four eight-storey buildings in the estate. The caretakers from the office in the estate make their regular rounds. The effect: the hallway on Ms. Kulzinger's floor is tidy. "That looks partly different in the former &sbquo;Schleich houses'. There are, for example, a lot of bicycles standing around in the hallway," says Bartram-Sitzius. GWH relies on a mixture of service and social control. A concierge sits on the ground floor and helps tenants with small tasks, but also keeps an eye on the entrance area. At the same time, video cameras record what happens in the elevator and other public areas. "We prevent vandalism in our buildings in this way," explains Martin Büttner from GWH.

Bartram-Sitzius praises the cooperation with the company. So the GWH in the settlement for a room for a women's meeting made available. This is a valuable support for the migrant women in the settlement. The cooperation with the police also works well. On the one hand, their station is further away after a merger, but on the other hand, there are more patrol cars on the road. "We certainly have problems, but the hard times are long behind us," says Bartram-Sitzius.

An assessment that is also confirmed by the police. "We see the development very positive," says Andreas Wagner, protection officer on site. He has known the area for many years. The cooperation with youth welfare, clubs and the public order office has proven itself. In his work, it is important for him to keep an eye on the subjective feeling of security of the citizens. For example, the police offer a weekly citizens' meeting and rely on the use of foot patrols. "In this way, the residents and our counterpart see that we are present," explains the officer. It's not helpful, then, when the media reduces a neighborhood to high-rises and crack dealers, such as happened in a television report last year. Residents of the estate and the surrounding district publicly defended themselves.

Mayor Feldmann knows such issues from his own experience. In the nineties, he ran the Jugendhaus am Bügel on Ben-Gurion-Ring for six years. The neighborhood was also struggling with problems at the time. "What kind of image is created in people's minds when they point fingers outstretched at the people in the district, as in articles like this. The reality is more complex!" he says. Because: "There are always the people who fight for something to change. These are first the residents with their initiative, the young people, the social agencies, the police, the housing companies, the religious communities - and many more! We have to support these people," says Feldmann. In this way, many small solutions emerge that make the district worth living in.

A tour through the quarter shows what such small solutions look like. On a meadow, four-legged friends regularly do their business and the owners don't seem to take it too seriously with the removal either. Bartram-Sitzius approaches Büttner from GWH about the problem: "There's a lack of bag dispensers and some litter bins." "I'll make a note of that," replies the representative of the housing company. And adds, "There's still something to be found. If need be, we'll donate it to the settlement anniversary!"

With municipal projects, this is not so easy, after all, the projects are several house numbers larger. For example, the Römer budget annually flows about 844,000 euros into the youth, family and senior citizen work on the Frankfurter Berg. This includes the "Jobscouts", which were added last year. This project aims to provide targeted support for young people in the settlement in their search for work. It is quite clear that the "Bersch" - as it is popularly known - has a future. Additional apartments have already been built on the former barracks site next door, and the city is developing a new housing area on the neighboring Hilgenfeld. Other steps such as transport projects have been announced. For example, the extension of subway line 5 from Preungesheim to the district's S-Bahn station is planned. A new traffic junction is to be created in this way. Therefore: "Congratulations and corks up for the next 50 years!"