The Holiday Inn Frankfurt Airport: New favourite feel-good place for guests from all over the world
from FFM Aktuell 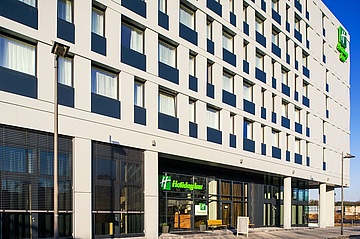 The Holiday Inn Frankfurt Airport is now celebrating its grand opening after a successful launch in December! The 288-room property is prominently located at the west entrance of the new Gateway Gardens district at 16 Bessie-Coleman-Strasse and is directly connected to Terminals 1 and 2 of Frankfurt Airport by shuttle bus. This makes this location absolutely perfect for tourists and business people. In addition, the city centre of the Main metropolis can be reached comfortably by the future S-Bahn stop not far from the hotel. The four-star hotel is also perfectly connected to the A3, A5 and A661 motorways and offers 50 underground parking spaces for its guests, not least for this reason.

In an area of around 12,000 square metres, the Holiday Inn offers 288 cosy rooms on six floors as well as a spacious meeting and conference area with daylight for up to 100 people. In the new open lobby concept, the public areas such as reception, lounge, restaurant and bar as well as the outdoor terrace flow seamlessly into one another. Free use of the fitness center and free WLAN round out the hotel's offerings. The operator of the Holiday Inn for the next 20 years is Primestar Hospitality.

The food concept: By no means hamburger - Frankfurt burger with green sauce is hip

Curtain up for the "Burger &agrave; la Krakow": Holiday Inn Frankfurt Airport chef Daniela Krakow has come up with a smart burger using regional ingredients for the restaurant's new menu. "For this, I sat in my office for hours and pondered over the right ingredients for the new burger," explains the 28-year-old. The result is something to behold and, above all, to eat: The Frankfurter Burger consists of a pretzel bun with coleslaw, Frankfurter green sauce, egg, cornichons and a meat and potato patti. "To my knowledge, there's nothing else like it in Frankfurt's culinary offerings," Krakow says.

The food in the hotel restaurant is meant to be upscale instead of offbeat. That's why the menu will include classics like spaghetti bolognese or sandwiches, as well as vegetarian and vegan dishes. In addition to such international cuisine, the focus is also on regional specialties - Handkäs and apple wine must not be missing from the hotel restaurant's menu. Daniela Krakow and her team place a focus on freshly prepared dishes: "You wouldn't believe how little fresh cooking is done in other hotels. We deliberately choose a different path and offer all visitors real taste experiences," Krakow is pleased to say. For example, even the buns for the Frankfurt Burger are freshly baked. 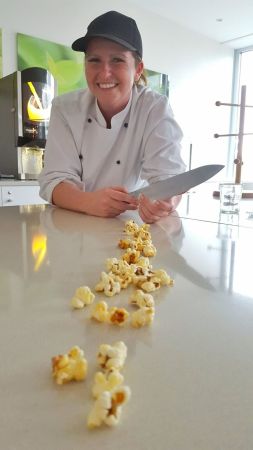 Another special feature awaits younger guests at the family-friendly hotel: A separate menu is being designed for them. "It should taste all guests with us - there it is natural that also the wishes of the children are taken seriously", explains Daniela Krakow. For example, the children were already able to actively participate in the selection of dishes as part of a painting competition and put their favorite food on the menu. Last but not least, the hotel's immediate proximity to Frankfurt Airport will also be picked up on: snacks are to be brought to the guest in the stylish sliding trolley, as they are also used on the plane.

Natural wine - that means first of all an extraordinarily high wine quality. This is because the producers make wines that are typical of their location and variety, with a strong character and terroir. The winegrowers also farm with respect for nature and therefore do not use synthetic chemical pesticides, mineral fertilizers and genetic engineering, as well as most of the fining agents and additives permitted in conventional viticulture.

The Holiday Inn Frankfurt Airport wants to offer its guests such pure enjoyment and is therefore including six natural wines from Austria, France and Spain in its range. This makes the 288-room property the only one in the whole of Frankfurt to offer such an extensive range. The natural wines are served in style on trolleys, as they are also used in airplanes, separately from the other beverage and wine list of the hotel. All natural wines offered in the hotel come from the Frankfurt wine shop "Cool Climate" (Berliner Str. 20) of sommelier Christian Lebherz. He knows all of his winemakers personally and places a focus on authentic wines that are full of character and produced close to nature.

Over the past few years, Frankfurt's new Gateway Gardens district has developed into an established hotel location that benefits greatly from the airport. According to Markus Frank, head of economic affairs for the city of Frankfurt, passenger numbers at Frankfurt Airport have doubled over the past 25 years, with the airport recording a record of over 61 million travellers in 2015. The number of overnight stays in the Main metropolis is also continuously increasing: Last year, a total of 8.7 million overnight stays were recorded, of which around 70 percent were accounted for by business travellers. According to the market report "Hotel Market Frankfurt 2015/2016" by Colliers International, Frankfurt thus has the strongest growth in overnight stays (+ 7.8 % compared to 2015) among all top locations. As the supply of hotels has not been able to keep pace with this growth, the Holiday Inn is now filling a gap.

More info is also available at: 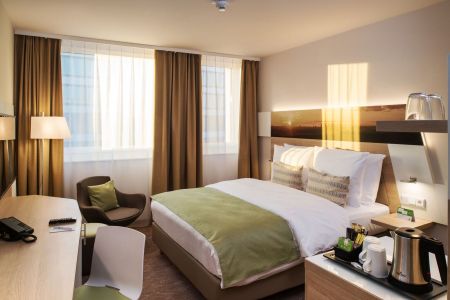