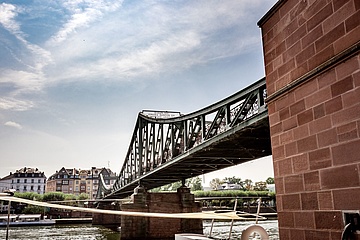 Happy birthday! One of Frankfurt's most famous landmarks celebrated its 150th birthday last weekend: the Eiserne Steg. Popular subject for photos, postcards, movies and TV series. Fully hung with love locks, often populated by tourists who immortalize themselves at this special place on selfies or classic snapshots. This 173.59 metre long and 5.44 metre wide footbridge is so much more than a simple link between Hibbdebach to Dribbdebach. The Iron Footbridge is also more than a tourist attraction. It is an unmistakable piece of Frankfurt - and therefore, of course, part of our Frankfurt-Tipp logo.

On its 150th birthday, the Iron Footbridge was festively illuminated and honored by the city's leader: "For us, the existence of the Iron Footbridge is a matter of course. But it was by no means so for Frankfurt 150 years ago. The history of this imposing bridge structure is closely linked to the history of our city and its rise to become an international business metropolis," said Lord Mayor Peter Feldmann during a ceremony to mark the 150th "bridge birthday" last Friday.

On September 29, 1869, the Iron Footbridge was handed over to its intended use as Frankfurt's second bridge over the Main. As so often in Frankfurt's city history, it was the bourgeoisie that drove important innovations and paid for the construction of the Iron Footbridge. When construction began in 1868, the city centre was bursting at the seams: For Frankfurt was once again suffering from considerable growing pains - the population rose from 35,000 in 1800 to 57,000 in 1840 within 40 years. This was accompanied by an extreme increase in the traffic of goods, which until then had been handled exclusively via the Old Bridge.

"In the city centre alone, a total of eight bridges now connect the northern and southern banks of the Main. But one can hardly imagine the hustle and bustle that must have prevailed on the Old Bridge in those days, when thousands of hackney carriages, pedestrians and mounted passers-by thronged there every day. It was clear to the people of Frankfurt that something had to happen: But the city, as so often, had no money," said the Lord Mayor, outlining the initial situation over 150 years ago. To remedy the situation, Frankfurt citizens founded an "Actiengesellschaft" to finance the construction costs, which were estimated at 120,000 guilders.

Only after refinancing was completed in 1886 was the bridge officially handed over to the city. Until then, every passer-by had to pay a toll of one kreuzer. The cheapest ride with the horse-drawn tram cost four kreuzer at that time. So it can be said that the passage of the Iron Footbridge was about as expensive for contemporaries as an RMV short-distance ticket.

The construction of the Iron Footbridge opened the door to urban modernism in architectural terms. The working material, wrought iron, from which the 500-ton bridge was made, just like the Eiffel Tower built in 1889, had only recently become available on an industrial scale. The engineer Peter Schmick was even honored with a progress prize for his design at the 1873 World's Fair in Vienna.

The construction of the bridge was also the beginning of an urban planning offensive that has shaped Frankfurt as we know it to this day: in 1873, construction began on the Alte Oper, which was also privately financed. This was followed in 1888 by the main railway station, which was still on the outskirts of the city at the time, together with the magnificent Kaiserstraße boulevard branching off from it. "The construction of modern Frankfurt began with a bridge across the Main. Our current economic metropolis is also characterized by rapid growth. To cope with this growth, we are not building bridges over rivers today, but into the region," said Mayor Feldmann.

By the way, the Iron Footbridge as it spans the Main today is not the original structure from 1869. When the Osthafen was expanded in 1910, the Iron Footbridge had to be raised so that larger ships could pass the bridge without danger. At the same time, the walkway was widened from 3.98 to 5.44 metres. In March 1945, the Nazis blew the bridge in two to "protect" Frankfurt from the advancing Allied troops. Shortly after the end of the war, however, the Eiserne Steg was passable again. It had to be raised again by 40 centimetres to 6.50 metres in 1969 in the course of work on the Rhine-Main-Danube Canal. In 1993, the structure was thoroughly renovated at a cost of 16 million marks and the lifts on both banks were added.

"With today and the inauguration of the new lighting system, we are continuing the eventful history of this Frankfurt landmark. I am sure that the Iron Footbridge will continue to shape the face of this city for at least another 150 years," said the city leader. During the ceremony, the costume group "Sachsehäuser Berjersleut"" provided the flair of bygone times, recalling the early years of the Iron Footbridge in their 19th century dress. The modern counterpart was a two-hour illumination of the Iron Footbridge, with which the bridge presented itself in festive light for all visitors.

To ensure that the Iron Footbridge continues to appear in the right light in the future, the footpath over the bridge was equipped with new lighting. The new lights were developed by the responsible Office for Road Construction and Development itself and manufactured in Frankfurt's twin city of Leipzig. They meet the requirements for environmentally friendly lighting and, thanks to their timeless design, blend in perfectly with the bridge railing below the handrail.

City councillor Klaus Oesterling, who, as the responsible department head, switched on the new lighting on Friday evening together with Lord Mayor Feldmann, is very satisfied with the city's own development: "The 51 new luminaires on the Iron Footbridge were reasonably priced due to our own development work. The modern LED technology is environmentally friendly and also stands for low operating costs," said Oesterling.

We say: Happy Birthday, Eiserner Steg - and here's to the next 150 years!