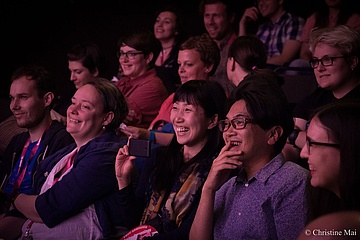 The largest Japanese film festival in the world is now taking place in Frankfurt for the eighteenth time this year. With over 100 short and feature-length films, including 37 German, 12 European and two world premieres alone, the festival offers a varied and exciting insight into Japanese cinematic art. The festival was born in 2000 as the idea of Marion Klomfaß, a student at the time, who wanted to show a few Japanese films together with a fellow student at the university. Surely only something for a small niche audience, since a broad mass of people would hardly be enthusiastic about watching films in the Japanese original with English subtitles, the organizers thought. Far from it, as the first edition of the Japanese film festival NIPPON CONNECTION already attracted 10,000 visitors. What was intended as a one-off experiment then became an annual event from 2002 onwards, which has grown steadily and now attracts film lovers not only from the surrounding area, as well as top-class guests to Frankfurt.

The festival also enjoys an extremely good reputation in Japan. Not only that Marion Klomfass was honored in 2013 by the Japanese foreign minister for her services to Japanese-German cultural exchange with the Gaimu Daijin Hyosho certificate. The festival is also of great importance for filmmakers. The greatest praise for the organizers is therefore that year after year numerous directors, producers and actors travel to Frankfurt, often at their own expense, to attend the NIPPON CONNECTION Festival. It is therefore all the more important to the largely volunteer staff that their guests also feel comfortable here and take only positive experiences home with them.

Once again in 2018, many directors and actors will be on hand to engage in direct exchange with the audience. "We are not a red-carpet festival," says Marion Klomfaß. Not only the visitors appreciate that, but also the international guests. The whole thing is organized by a total of 70 people, with another 100 or so helping out during the festival days. In the 18th year, they have once again put together a multifaceted, extremely attractive program. In addition to the films, this also includes the very diverse supporting programme, which offers the opportunity to immerse oneself in the multifaceted culture of Japan in a wide variety of ways.

In addition to the well-known sections NIPPON CINEMA, NIPPON RETRO, NIPPON ANIMATION and NIPPON VISIONS, there will also be a separate section for documentaries for the first time this year. As documentaries have repeatedly won audience and jury prizes at the festival in recent years, they will have their own section dedicated to them for the first time in 2018 with NIPPON DOCS. There is not yet a separate prize for it, but as before, films from this new section can win the NIPPON VISIONS JURY AWARD or the NIPPON VISIONS AUDIENCE AWARD.

The 2018 NIPPON HONOR AWARD will go to Shinobu Terajima, one of Japan's most renowned actresses, who will also accept the award in person. At NIPPON RETRO in the cinema of the Deutsches Filmmuseum, the focus this year is on legendary swordfighting films from the 1960s. Original prints will be shown, not digital copies, which cineastes will surely be pleased about.

At NIPPON CULTURE, performances, workshops, lectures, cooking classes or a photo exhibition are then on the agenda. This will be another six really exciting, diverse and great days, which are guaranteed to underpin the good reputation of the festival once again.

For more info and tickets go to: nipponconnection.com