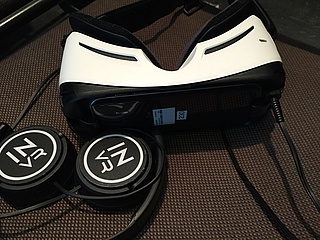 VR technology may still be in its infancy. But it is already clear that there are many different, exciting uses for this new medium - whether in technology or medicine, but also in art and film. This year's LICHTER Filmfest is therefore also dedicated for the first time to narrative and documentary Virtual Reality films. These are experiments, as the form of storytelling has to be virtually reinvented for this medium. The way in which the films in the VR Storytelling competition are shown is also experimental: viewers should not just wear the VR glasses and then have the respective films played for them. Rather, the whole thing is meant to be a communal experience, which is a real challenge from a purely technical standpoint.

Watching the VR films is a truly fascinating experience. Whether it's a documentary or an experimental rush of imagery, the attempts to not only intoxicate the viewer with 360 degree footage, but to also incorporate a narrative structure is really something new that you should definitely get involved with for yourself. The five finalist films will be on view at studioNAXOS until Sunday, April 02. This VR experience alone is worth a visit to this year's LICHTER Film Festival.

Now the winner has also been selected from the five finalists.The first LICHTER Virtual Reality Award goes to .

From over 50 submissions, Ralph Benz (3sat), Astrid Kahmke (Bavarian Film Center), Kay Meseberg (arte), Eckart Köberich (ZDF Digital) and Maro Heutnik (CHEIL) selected the five 360&deg;films. In judging the narrative and documentary virtual reality films, the jury did not focus on the pure spectacle for which the technology has been known so far. "We were looking for films that were not just intoxicated by the technology, but that put themselves in the service of the story," says festival director Gregor Maria Schubert.

The five films in the Virtual Reality Storytelling competition take festival-goers at studioNAXOS into a wide variety of visual worlds where the viewer is right in the middle of the action. Alexandre Perez is the winner and can look forward to a cash prize of 1,000 euros. The prize sponsor and main supporter of the LICHTER VR-Lab is the Aventis Foundation. In the German premiere Sergeant James, the Frenchman takes the viewer into a highly unusual perspective - under the bed of a 7-year-old boy. A role reversal that quickly makes clear: even monsters can be afraid of strange occurrences. The film makes skilful and sensitive use of the many creative possibilities offered by the medium of VR. Magically liberated from traditional narrative forms in 2D TV space, one can sense in Sergeant James the potential that storytelling in 360<x>ampersand</x>deg;-space can enable, the jury statement said.

Place 2 went to Dublin in the Dark: The Story of 'Emerald Noir' by Henry Stuart. The film is a wonderful short trip through Dublin. From the fine choice of locations, to the right timing, to the technically adept 3-D visuals, the film is superbly produced, according to the judges. A genuinely fascinating piece of work that makes great use of the possibilities of VR.

An extraordinary music video landed in 3rd place: in Tankstelle des Glücks by Uwe Flade, Friedrich Liechtenstein makes an offer you can't refuse: a whimsical joyride through Berlin. The 360<x>ampersand</x>deg;-film convinced with its creative ideas, which were not only technically implemented almost perfectly, but also made effective use of the all-round medium. The second and third place winners each received 500 euros from ZDF Enterprises.

In addition to the competition, international experts shared their experiences with storytelling in virtual worlds at a conference as part of the ZDF Digital I VR Lab at studioNAXOS. In addition, filmmakers can learn about tools for creating VR content at a trade show on Festival Friday. Teltec, ZDF Digital, Darmstadt University of Applied Sciences and Samsung will be represented with exhibition stands.

More info can also be found at: 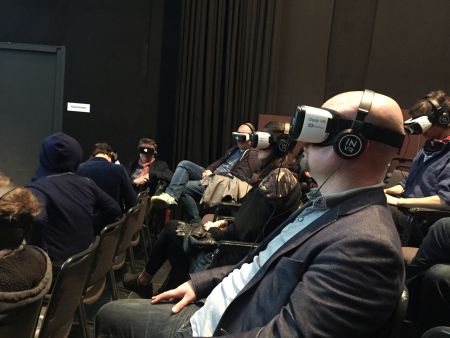