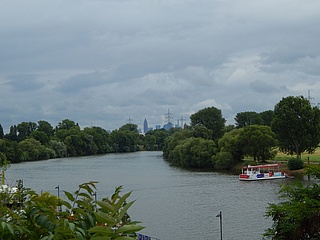 The beautiful <link https: www.frankfurt-tipp.de ffm-aktuell s ugc halbzeit-beim-freiluftkino-frankfurt.html _blank>Open Air Festival in Frankfurt's city centre is just going into extension, the makers of the LICHTER Filmfest have already announced the next cinematic open air highlight. On Friday, 04 August, they invite you to a special cinema evening in nature. As in the past two years, the banks of the Schwanheimer Fähranleger in Höchst will once again be the setting for an open-air cinema evening in 2017. Aki Kaurismäki's new masterpiece "The Other Side of Hope" will be shown. Admission is free.

The cooperation between the LICHTER Filmfest Frankfurt International, the Stadtplanungs&shy;amt of the City of Frankfurt am Main and the Quartiersmanagement of the NH Projekt&shy;Stadt enters its third round. As part of the Days of Industrial Culture Rhine-Main, the LICHTER Film Picnic once again shows how wonderful it is to spend cinema evenings together in unusual and at the same time fantastically beautiful surroundings. It combines film le&shy;ben and picnic enjoyment, a social and cultural commentary on the common good and public&shy;keit. The principle on site is simple: everyone brings something to eat and drink as well as dishes, glasses and blankets themselves from 6pm onwards and enjoys the Friday evening in the Grü&shy;nen with friends, family and children - and of course with free admission.

At the Mainfähre Höchst, Schwanheimer Ufer landing stage - the only Mainfähre in the Frankfurt city area - THE OTHER SIDE OF HOPE will then flicker across the screen shortly after dark at around 9:30 pm. In the new film by Aki Kaurismäki, Khaled flees to Helsinki. Before the young Syrian can think much about his future, his asylum application is rejected and he is ordered to return to Aleppo. But for Khaled, the ruins of his hometown are not an option, he decides to stay in the country illegally. Soon he has to spend the night on the street. The hope for a better life in Europe has finally died. But suddenly Wikström is standing in front of him - and for a moment life shows its sunnier side. For there is someone who can no longer stand by and watch this injustice. It doesn't take long, however, before fate strikes again.

Laconical, whimsical and minimalist as ever, the exceptional Finnish director depicts a life caught between constant longing and wavering hope, full of fairy-tale humanity and cold realism.

Aki Kaurismäki was awarded the Silver Bear for Best Director for The Other Side of Hope at this year's Berlinale.

Have you already got an appetite for this film evening? Then pack your picnic baskets, call your friends and enjoy a pleasant end of the week together!

Please bring your own food and drinks

In case of persistent rain the screening will be cancelled