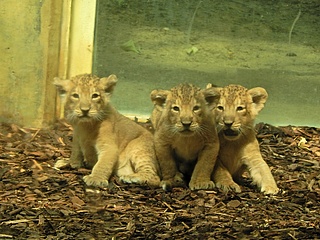 About the joyful event at Frankfurt Zoo, the birth of the lion triplets on April 14, <link https: www.frankfurt-tipp.de ffm-aktuell s ugc nachwuchs-bei-den-loewen-im-frankfurter-zoo.html _blank>We have already reported to you HERE. After lion mom Zarina has lovingly cared for the cubs in the past weeks in the secluded litter box, the offspring could also explore the indoor enclosure of the cat jungle for the first time in the past few days. In order for them to do this as undisturbed as possible and get used to their surroundings, this area of the zoo was closed to the public. But as of now, the doors of the cat jungle are open again - and with them the view of the lion cubs. Provided they show themselves.

Because Zarina is still very protective. If she sees a danger for her babies or if it becomes too much for her, then she quickly disappears into the litter box again. Here the three sweet rascals, whose sex can probably only be determined in about two weeks, can at least be observed via a camera. But to see them romping around in the enclosure is a very different, special experience.

Zoo director Dr Miguel Casares is happy about this breeding success and that the young animals are doing so well. For him, it is all the more important that the expansion of the outdoor enclosure is implemented as quickly as possible. Last year, the fundraising campaign "Make room for the king" was launched for this purpose and has already found many supporters. But the final goal for funding the facility is still a long way off. That's why Casares is hoping that new blood will give the campaign another big push.

"The three cubs probably won't be able to benefit from the expansion just yet," says cultural affairs director Ina Hartwig. But with the entire zoo team now hoping that Kumar and Zarina will have even more offspring and further increase the zoo's population of Asiatic lions, the conversion and expansion of the enclosure would be a project of great urgency for Frankfurt Zoo.

For now, the outdoor enclosure is being childproofed so that the three little lions can roam around there with their parents. For this to happen, however, Zarina will first have to adopt a more relaxed demeanor toward Kumar. "Mother lions are very protective and often show aggressiveness towards even the fathers of their cubs in the beginning," Casares explains. "Only when Zarina's behavior makes it clear that she tolerates Kumar around the cubs will we let the animals stay together." We hope everything continues to go as well as it has so far and look forward to many magical moments with the cute cubs