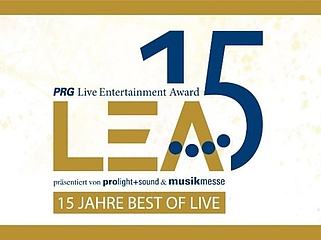 This event, which is celebrated by many as one of the most impressive awards ceremonies in the cultural sector, has been the official kick-off for Musikmesse and Prolight + Sound for the past nine years.<After the two leading trade fairs had already been cancelled two weeks ago in connection with the <a href="https://www.frankfurt-tipp.de/specials/coronavirus-in-frankfurt.html">protective measures against the spread of the Covid-19 epidemic, they were now followed by the Live Entertainment Award. For two weeks, the gala had been sold out with around 1500 guests - including numerous national and international artists* and celebrities from all areas of the cultural industry.
<x>>BR</x>With live performances, the gala had announced itself and was also a great success.Ulrich Tukur with his Rhythm Boys, the Moka Efti Orchestra feat. Severija, LaBrassBanda together with Seiler und Speer, Lilly Among Clouds, Voice Of Violin, Helmut Zerlett with his band and David Buckingham. As laudator* Doc McGhee, Jeanette Biedermann, Matthias Reim, Philipp Poisel, Pierre M. Krause, Sky du Mont, Semino Rossi, Dr. Pop and Jam El Mar wanted to participate.