The Luminale 2018 makes the Römer glow
from FFM Aktuell 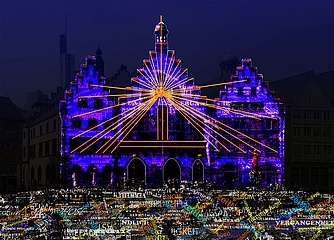 The Luminale 2018 promises to be one of the very big event highlights of the year with a new concept. One of the special installations will be a light space created by artist Philipp Geist right in the heart of the city: 'Frankfurt FADES' will turn Römerberg into a very special light space that visitors can immerse themselves in from 18 to 23 March. A video mapping on the façade of the town hall and a floor projection on the forecourt will combine the building and the terrain to create an expansive work of light art.

The special thing about this is that the viewer himself becomes part of the installation, as the floor surfaces and not just the façade of the Römer are also included in the artistic concept. As you walk through the room, new views and perspectives of the familiar area open up. Atmospheric sounds add another level to the pictorial compositions on the Römerberg. It can be assumed that the Römerberg will become one of the very big hotspots of this year's Luminale.

You can also participate in "Frankfurt FADES". This is because Philipp Geist artistically integrates words and terms on the meaning of place into his work, which are previously submitted by Frankfurt residents as contributions to the artwork. On fog walls these words are visible for a short time and disappear again; as an immaterial projection surface they symbolize thoughts, visions and inspirations, but also stand as a metaphor for transience. From now until March 10, you can send words and terms on the topics "Frankfurt, Römer, time, old town, modernity, people" by e-mail to <link>Frageinkfurtfades@videost.de. The terms sent in will then be visible in the light installation from March 18 to 23 from 7 to 11 p.m. each day.

Renowned Berlin light artist Philipp Geist explores the complex interplay of light, sound, space, movement and visitors in his work. His projects take the artist all over the globe.

In Rio de Janeiro he illuminated the famous statue of Christ, in Tehran the Azadi Tower, in Bangkok the throne of the Thai King Bhumibol. Philipp Geist is constantly developing the installation "TIME DRIFTS". After the Luminale 2012 in Frankfurt, versions of the concept were created for Weilheim and Cologne. Here, Philipp Geist staged the cathedral and the Domplatte with "TIME DRIFTS Cologne" on New Year's Eve 2016.

With around 200,000 visitors, the Luminale is one of the largest events in Frankfurt and the Rhine-Main region. The light festival takes place every two years at the same time as the international trade fair Light + Building. Luminale was founded in 2002 by

Messe Frankfurt, which has since extensively promoted and supported the festival. From 18 to 23 March 2018, the Luminale will be launching with a new concept. Frankfurt and Offenbach will not only be the stage for light art, but also the subject of the festival itself. The Luminale positions itself as a BIENNALE FOR LIGHT ART AND

CITIES DESIGN with the aim of providing an impulse for the positioning of the city as an attractive future location and "creative hub" at the interface of art, technology and urbanity.