The MOMEM - Museum Of Modern Electronic Music is coming!
from FFM Aktuell 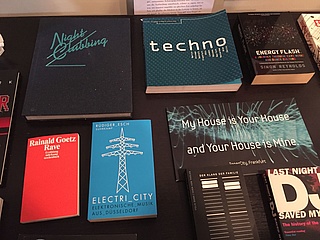 For five years there have been plans, again and again there was great progress, but also bitter setbacks. Until today it was not clear if MOMEM, the Museum Of Modern Electronic Music will really exist someday. This uncertainty is now over. At a press conference, the designated director of MOMEM, Alex Azary, was able to proudly announce: "The promises of the city will be kept, the premises of the Children's Museum at the Hauptwache can be used and Lord Mayor Peter Feldmann will be patron - MOMEN will come!".

This announcement is not only a minor sensation because after many years of plans, conjectures, hopes and disappointments, there is finally positive certainty. Rather, it is the fact that the world's first museum for club culture and electronic music will be built in Frankfurt that makes this news so special. Earlier announcements have already shown that this museum will attract a lot of attention not only in the region, but worldwide and will make Frankfurt even more attractive for tourism.

Feldmann praised the initiators Alex Azary, Andreas "Talla 2XLC" Tomalla and Stefan Weil for their patience and perseverance, which is especially important in the cultural field. Head of Culture Ina Hartwig added: "The electronic music that went out from here into the world is part of Frankfurt's cultural identity. Now I am curious to see how the initiators will realize this unique music and exhibition project. I'm convinced by the concept, which shows cultural connections and enriches the diversity of the local museum landscape for a young, international audience."

When the Caf&eacute; for the homeless, which has been housed in the former Children's Museum rooms during the winter months, moves out again in the spring, the conversion can finally get underway. However, the previous plans have to be adapted a little to a new situation. Up to now, it was planned that the museum would be a permanent institution. This is now no longer the case. Since there have been plans for the redesign of the Hauptwache for some time, it is currently assumed that these could be implemented in two to four years. Therefore, according to the current state of affairs, MOMEM will only be able to remain in the premises at the Hauptwache for this period as a kind of pop-up museum - although Mayor Feldmann also remarked with a wink that it is well known how slowly some bureaucratic mills paint. So it may well be that the museum can stay a few days longer at the attractive location.

"The Hauptwache as a colourful, lively kaleidoscope of people and cultures in our city is exactly the right place for MOMEM. I hope that in the coming years it will carve out a permanent place for itself there as a charming <x>Ampersand</x>sbquo;provisional venue' in keeping with its content, and that it will remain with us permanently for the future," said Head of Human Resources Stefan Majer.

If the initiators have their way, MOMEM will open later this year. What exactly visitors can expect will be announced after the handover of the premises in April. Only this much is already clear: the new museum will not only document electronic music, but also make it possible to experience it acoustically and haptically. It presents artists and producers, technology, club culture, label foundations, event concepts and digitalisation. The programme includes readings, lectures, events and guest performances by artists presented in the museum. At the attached academy, DJs and producers offer workshops as well as seminars and provide an insight into everyday studio life.