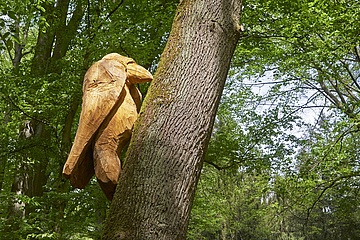 For eleven years, the monster woodpecker designed by F.K. Waechter designed Monsterspecht was one of the highlights of comic art in the GrünGürtel. But then he was hit by a neighboring tree during a storm, costing the popular woodpecker his beak. But fungal decay also took a toll on him. And so, after more than a decade, he was sent into well-deserved retirement. After the place in the eastern city forest was orphaned for several months, Monster Woodpecker 2 may now start his service on a new tree. On Monday, Environment Department head Rosemarie Heilig and Kelsterbach Mayor Manfred Ockel unveiled the artwork.

The comical bird is almost two meters tall and weighs a stately 300 kilograms. Compared to its predecessor, it is even a little stronger, but it certainly lives up to its name. With the comeback of the monster woodpecker, the comic art in the GreenBelt is finally complete again. The series of artworks, conceived by the artists of the New Frankfurt School, comprises 14 pieces. First and foremost the GrünGürtel animal by Robert Gernhardt, but also the Barefoot, the Me Monument, the Struwwelpeter Tree and the other comic works of art are known and loved, just as the Monster Woodpecker.

"That's why," Heilig pointed out, "after the end of Monsterspecht 1, there could only be one motto: The woodpecker is dead, long live the woodpecker." Without hesitating for long, a new Monsterspecht was commissioned. Like Monsterspecker 1, the successor was created by the artist Andreas Rohrbach from Kleinkahl in Spessart. He sawed, hewed and carved the figure from poplar wood according to Waechters specifications.

7000 euros has cost the fun altogether, including expert opinion and assembly. The sum is shared between the environmental agency and the Regionalpark-Gesellschaft Rhein-Main Süd-West, of which Mayor Ockel is the managing director. Since the beech tree on which Monster Woodpecker 1 used to perch was a victim of the August 2017 storm, its successor now sits about 50 meters from its old location at the Oberschweinstiegschneise/Hainerweg intersection on a 173-year-old English oak. A good choice, as a specially commissioned surveyor attested. The tree is stable. "I am convinced that our new monster woodpecker will feel at home in the oak," Ockel said