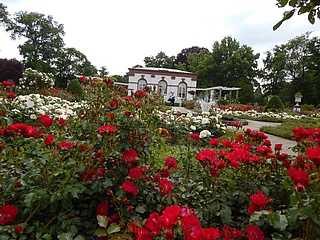 A picnic in the countryside, d&eacute;jeuner sur l'herbe - dining together in the great outdoors is a common phenomenon worldwide. Starting in May 2017, the exhibition "Picnic" at the Museum Angewandte Kunst in Frankfurt explores the fascination of picnicking across different times and cultures.

The focus is not only on faraway places, but also on the picnic culture in the Main metropolis. To this end, the Museum Angewandte Kunst is asking the people of Frankfurt for their help: private photos of the Rose and Lights Festival in the Palmengarten are being sought. The festival, which has been held every June since 1931, attracts young and old with all their children to the green oasis in the middle of the city, which is decorated with roses for the occasion and artfully illuminated with thousands of tea lights after dark.

Pictures can be submitted from the nostalgic shot from the family album to the recent snapshot taken with the smartphone, only the motive "picnic" should be recognizable in the broadest sense.

The museum will make a selection from the entries, and these images will be shown in the exhibition and printed in the accompanying catalogue. As a thank you, each of the entrants whose image is selected will receive free admission to the exhibition and a complimentary copy of the catalogue. The deadline for entries is Wednesday, November 30, 2016.

Images can be emailed to <link>Leonie.wiegand@stadt-frankfurt.de or mailed to Museum Angewandte Kunst, Schaumainkai 17, 60594 Frankfurt, Germany.