The museum may come: Magistrate decides to support MOMEM
from FFM Aktuell 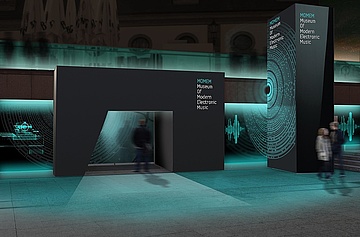 Already in 2018 we had reported that this year the Museum of Modern Electronic Music, short MOMEM, will open at the Hauptwache. A prestigious project for the city, which already caused an international sensation when it was announced. After all, it will be the world's first museum of its kind. But then it became strangely quiet around the project. The reason was soon clear: there were problems with the financing. And indeed it looked for some time as if the museum, despite all the many positive aspects that it will bring for the initiators, the visitors and ultimately also for the city, was seriously endangered.

However, now there is really good news: The MOMEM receives a loan from the City of Frankfurt to finance the project. This was decided by the city magistrate on Friday 6 December. The city councillors are to decide on the proposal next week. The museum, which is to be built on the premises of the former children's museum, is thus making good progress. Lord Mayor and MOMEM patron Peter Feldmann was delighted that the museum has been granted the loan: "Frankfurt stands like no other city for electronic music. It is correct that we give the MOMEM now the correct thrust, so that it can finally go off ?, so Feldmann

Each Kulturdezernentin Ina Hartwig sees in the museum a genuine enrichment for Frankfurt and is therefore lucky over the fact that the political disputes seem to be settled: The MOMEM follows an innovative museum concept, which unfolds international radiant power. I am sure that the museum will become a flagship for Frankfurt."

Easier and happier should be Alex Azary, chairman of the Friends of MOMEM association. After months of uncertainty the next stage can be ignited for his heart project now finally: "We are pleased that the city of Frankfurt found a way to make the MOMEM possible. We go now with full Elan to the planning and the change work with the goal of opening in the spring 2020 , so Azary hopefully

The compromise, which was found for the initial financing now, makes altogether 500,000 euro available, which are made available as loans. This should enable the MOMEM to invest in museum architecture. In November 2015, the magistrate had already stipulated in a letter of intent that the premises in the intermediate level of the main guard used since then by the former Children's Museum should be handed over to the Friends of MOMEM association. The city council approved this decision in 2018. The magistrate has made several public announcements about the establishment of the MOMEM and underlined the importance this has for the city of Frankfurt am Main, also in an international comparison.

We are already looking forward to the MOMEM and wish the team all the best for the coming months! And of course we will keep you up to date about the development!