The MuseumsuferCard 2019: Discover new things and save ten euros until the end of the year!
from FFM Aktuell 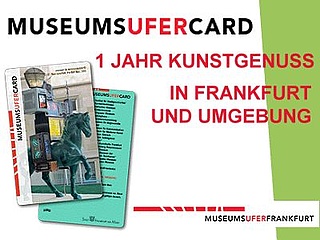 Graphic: City of Frankfurt am Main

Included are both large houses such as the Museum of Modern Art, the Schirn Kunsthalle Frankfurt and the Senckenberg Natural History Museum as well as museum insider tips such as the Cowherd Tower and the Eintracht Frankfurt Museum at the stadium. The City of Frankfurt's annual pass and its benefits are more popular than ever: "The success of the MuseumsuferCard speaks for itself," notes the City's Head of Cultural Affairs, Ina Hartwig, with delight. "More than 25,000 tickets sold testify to the fact that the card is very well received by the citizens of Frankfurt and also the region. Its popularity underlines the top-class work of all participating houses and their attractive exhibition programme."

For six years, the price of the MuseumsuferCard was kept stable - during this time, there were many new things for cardholders to discover: both the Städel extension and an MMK branch in the Taunus Tower were opened. The Museum Angewandte Kunst, the Museum Sinclair Haus in Bad Homburg and the Museum Judengasse were extensively renovated. And for a good year now, the new building of the Historisches Museum Frankfurt with the Junges Museum has been shaping the Römerberg in the direct vicinity of the new Old Town.

In addition to permanent exhibitions, all special exhibitions can be visited - and the preview for 2019 is enticing. For example, the Städel Museum presents both Picasso and Van Gogh, the Deutsches Filmmuseum hosts an exhibition on the estate of Maximilian Schell, and the Museum Angewandte Kunst awakens the desire for beauty with "SAGMEISTER & WALSH: Beauty" and "Contemporary Muslim Fashions". On the occasion of the Bauhaus anniversary, three houses illuminate Frankfurt's special architectural history of the "New Frankfurt": The Museum Angewandte Kunst, the Historisches Museum, and the Deutsches Architekturmuseum will present a series of exhibitions on this subject beginning in January. And the Schirn Kunsthalle will also be offering a special highlight in the coming year with the works of Bruno Gironcoli.

There are also three new and reopenings: The Stoltze Museum and the Struwwelpeter Museum will soon open their doors in the new Old Town. The Jewish Museum will celebrate the grand reopening and inauguration of its spacious extension, which will house the Frank Family Centre in the future, at the end of 2019.

In addition, next year the MuseumsuferCard will again enable visitors to attend the Night of the Museums on 11 May with free admission and invites them to the Museumsuferfest from 23 to 25 August.

Culture-loving families can use their card for two adults and all their own children or grandchildren under the age of 18 to take advantage of the entire range of offers. And to keep track of the diverse program of the houses, cardholders will find the art magazine art kaleidoscope free in their mailbox every three months.