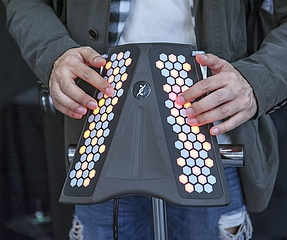 Musikmesse will once again showcase the latest trends in musical instruments from April 02 to 05. But this year, not only the latest instruments are to be shown. The most unusual musical instrument of the year is also being sought for the fair. And so the Musikmesse is launching a call for entries from the creative musical-instrument and hobby scene. Because it doesn't always have to be just guitar, drums and piano. Music can also be created with other, unusual instruments. And every new instrument expands the sound cosmos. For this reason alone, this creative instrument scene has been honored for some time now every year on July 31 - with the "Day of Uncommon Musical Instruments" ("Uncommon Musical Instrument Day").

The Musikmesse in Frankfurt picks up this thread. A top-class jury of experts will judge all entries. The most original three instruments will be prominently displayed at the next Musikmesse in April 2019 and receive awards.

This much is already certain: there will be plenty to marvel at. Especially since exotic instruments bursting with imagination have enriched music for centuries: from spherical salad bowls to a drum kit made of cheese wheels, the five-necked Hamer guitar by Cheap Trick guitarist Rick Nielsen to the Yamaha design study "Raijin", a drum football made of percussion instruments with five bass drums.

Michael Biwer, Group Show Director of the &sbquo;Entertainment, Media & Creative Industries' division of Frankfurt Exhibition GmbH is certain: "Every instrument idea, no matter how crazy, is an enrichment - and testifies to the ingenuity and inventiveness of the music scene. Of course, there's no shortage of fun in the process."

All makers, tinkerers and inventors can still participate until March 20 at: Www.musikmesse.com/instrumente