The MyZeil shopping center is 10 years old
from FFM Aktuell 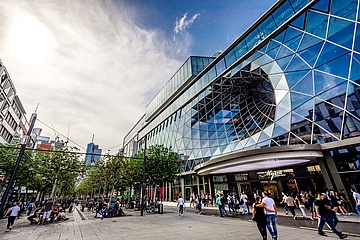 Children how time passes. It is already ten years ago that a new shopping center was opened on the Zeil with a lot of fanfare. On Tuesday, 26.02.2009, the former Lord Mayors Petra Roth and the former Center Management gave the go-ahead for MyZeil. Thousands of curious people waited for Roth to cut the ribbon, which was held by two female climbers, punctually at 10:00. The great interest in the center was shown by the fact that after only 2 weeks the mark was broken by one million visitors. And the success continues even after a decade.

The main attraction in MyZeil is of course the longest internal self-supporting escalator in Europe, the Expressway, 42 metres long, which is unique to date in a shopping centre in Europe. The glass funnel designed by the Italian architect Massimiliano Fuksas from Rome still attracts visitors from all over the world and is one of the most popular photo motifs in the city centre.

In total, almost 100 shops opened in 2009. Besides the anchor tenants Rewe, Anson’s, Saturn and the fitness studio Fitness First, the perfumery Albrecht is one of the operators of the first hour. To date, the MyZeil shopping centre has welcomed around 150 million visitors. The management takeover by ECE Projektmanagement GmbH & Co.KG in 2014 was followed by many unique campaigns and events, such as Surf Days - Germany's highest wave, the ice rink above the rooftops of the city or the DownMall Bike campaign in a shopping center. MyZeil has experienced a lot of action in its first ten years and has also served as a film set several times, for example for the comedy “Männerhort“. But of course they don't want to rest on their laurels and so MyZeil will shine in a whole new splendour in its anniversary year.

>The shopping center has been undergoing renovation since January 2018 and will be “fit“ for the next few years. In addition to an extensive mall refurbishment, FOODTOPIA - the new and unique gastronomy and entertainment destination - will be built on the 4th floor by April 2019. “With Foodtopia we are creating a new attraction in MyZeil an der Zeil. I am looking forward to the next chapter in the MyZeil success story. The shopping center has already been a highlight since its opening and will continue to expand its leading position as one of the most popular shopping centers in Germany as a result of the renovation measures. ECE is thus setting another highlight“ in Frankfurt, according to Marcus Schwartz.

On 11 April, the 4th quarter of the year will see the launch of a new ECE product. The first floor will open: the Hawaiian concept of the Hamburg two-star chef Karlheinz Hauser and his son Tom Hauser “Poké You“, Mexican cuisine with Chipotle, dean&david / Pommes Freunde, coa, Eis Manufaktur, Papa Napoli, eatDoori, Heidi und Paul, as well as Starbucks with a special coffee house concept. Until the Grand Opening in late summer, the other concepts Sander, Big Chefs, La Maison du Pain, Alex, as well as the Astor Film Lounge will open.

We congratulate you on your birthday and are looking forward to what the next ten years will bring!

Further information can be found at: https://www.myzeil.de/foodtopia/