The new Historical Museum is ready: from a specialist museum to a city museum
from FFM Aktuell 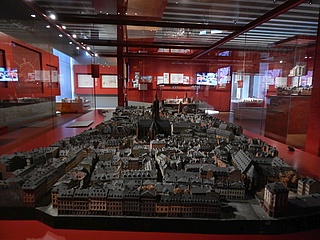 At last the time has come: after ten years the Historical Museum shines in new splendour. Already a few months ago, we had the opportunity to walk through the new premises as part of the handover of the Museum Quarter to the Cultural Department of the City of Frankfurt, where at the time there was still a lot of construction going on and where there were also no exhibits to be seen yet. That has now changed. On 4,200sqm of exhibition space, the new Historical Museum now presents more than 4,000 objects in six permanent and various temporary exhibitions. In the new conception of the permanent exhibitions, one thing was in the foreground: in the future, the museum should not only focus on the city, but should be a place for the inhabitants of this city and also include them. At the same time - and this was probably the greatest challenge - tourists should of course also be addressed and informed about the history of Frankfurt then and now.

After a detailed tour of the new premises, it can be said: The team around museum director Jan Gerchow has managed very well to meet completely different visitor needs. Whether in the snow globes, in which eight artists present their very own interpretation of the city, by means of 100 exhibits from the permanent exhibition or in various city models - an interesting, educational, surprising or creative view of our beautiful city and its long history is really offered everywhere here.

Of course, the visitor can just stroll through the exhibition rooms looking at things. But there are also numerous stations where direct participation is possible. Because, says Gerchow, the museum should be experienced with as many senses as possible. What has also been well implemented in this new concept is the balancing act between the historical, which the museum already bears in its name, and the modern. The digital offerings, many of which are (or will soon be) usable directly in the museum, are a real asset to the actual visitor experience.

For those who want to delve even deeper, the new publications that came out in time for the opening are recommended. In addition to a general guide to the new museum also have the 100 Frankfurt pieces from the permanent collection, the snow globe and its artists, and the Library of Generations (formerly Library of the Aged) get their own book. And there is also a highly recommended publication for young museum visitors, the graphic novel "Frankfurt 1742".

There would be a lot more that could be said about the beautiful new Historical Museum. But it's best to see it for yourself - for example at the big Citizen's Festival on 07 and 08 October, when the museum will be presented to the public with many nice special events. The festival will take place on both days from 11:00 - 19:00, admission is 8 <x>amp</x>euro; for adults (4 <x>amp</x>euro; reduced).

You can also find all further info at: www.historisches-museum-frankfurt.de