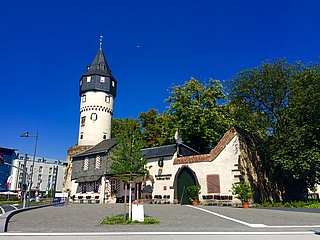 (kus) Another project of the "Program Schöneres Frankfurt" has been completed this year, following the second construction phase of Frankenallee and Große Friedberger Straße. Where previously there were only roads and stand-off areas and Friedberger Warte lay isolated as an island next to the new residential areas of New Betts and New Atterberry, a new attractive neighbourhood square has been created.

"With the completion of this beautiful new square, a piece of urban history has been completed for the residential neighbourhoods around Friedberger Warte that have been developed in recent years. Ideally framed in terms of urban space by ground floor zones with retail and a citizens' and senior citizens' meeting place, the newly renovated square has the best prerequisites for becoming a popular and attractive neighbourhood centre," says Head of Planning Mike Josef. "The listed Friedberger Warte is not only the name-giver, but is now integrated into the new area and, with the gastronomy housed there, is the clear focal point of the new square."

Head of Transport Klaus Oesterling adds: "The section of road to the east of the Warte, which has been disused since 2011, has been converted here with the existing footpaths into a continuous 8200 square metre attractive square area. The Friedberger Warte, freed from its insular position, now forms striking focal points on the new square area together with the old stock of trees, embedded in generously planted tree beds."

The new square presents itself with a natural stone paving, which takes up the connection to the historical Warte and thus does justice to this important monument, with generous, flowering planting beds around the large existing trees as well as lounging possibilities distributed around the square. Particularly noteworthy here is the new fountain installation with the two adjacent water-bound areas, which are an attractive attraction with their benches and play points under newly planted tree groves. A total of 18 new trees were planted during the square redesign.

The requirements of mobility-impaired and visually impaired people were comprehensively incorporated into the planning and implemented barrier-free throughout the square, despite considerable height differences of up to four metres.

In the lower area a new parking lot is arranged, the upper square area around the control room with the new natural stone paving is only open for service traffic of the control room and the planned weekly market. The arrangement of the tree beds and the preparation of the surface is designed to accommodate up to twelve market stalls.

The new square design also invites neighbourhood festivals, as those involved in the opening have already demonstrated. With a great deal of commitment, they put on a big party to mark the completion of the construction work.

With the construction and financing decision, a budget of around 4.4 million euros gross was set. Of this, approximately 3.8 million euros are for the construction costs, including the façade lighting of the Wartenturm, which will be installed shortly and will highlight the importance of this monument in the night scene